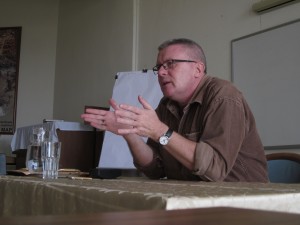 Gregory Collins, OSB, is the Abbot of Dormition Abbey in Jerusalem.  He was born in Belfast in 1960. He studied at Queen’s University Belfast, gaining a doctorate in Byzantine Studies in 1991. He spoke three times at Tantur:

Becoming a Benedictine, Father Gregory made Solemn Profession at Glenstal Abbey in 1994. Following ordination as priest in 1995, he studied Depth Psychology at the Jung Institute in Zurich. Between 1998 and 2002 Father Gregory was Headmaster of Glenstal Abbey School, after which he spent six years teaching Orthodox Theology and the History of Theology at the Benedictine university of Sant’ Anselmo in Rome. Since returning to Glenstal, Father Gregory has had a varied ministry of writing and preaching retreats. Among his publications are The Glenstal Book of Icons (Dublin: Columba Press, 2002) and Meeting Christ in His Mysteries: A Benedictine Vision of the Spiritual Life (Dublin: Columba Press, 2011)