On October 27 we drove to Olympia, the site of the first Olympic Game in the eighth century BC. It is a beautiful grove near the Kladeos River. There is evidence of religious activity at this site as early as the 10th century BC.  But around 700 BC, the authorities of nearby Elis began to level the land and dig new wells. It became the center of organized games to honor Zeus, the greatest of the Greek Gods.  A temple to Zeus was built in the fifth century.  It housed a gigantic ivory and gold statue of Zeus created by the sculptor Pheidias, which was so large that it was judged one of the wonders of the ancient world.  Unfortunately, it was destroyed, but there are literary descriptions of it.  We could imagine how large the statue is by seeing one of the temple columns that has been raised up at the site. 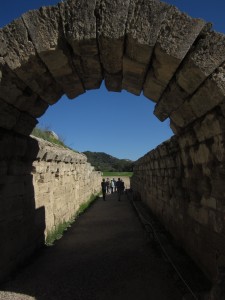 A stone arch led to the stadium.

We walked under an arch to the field where the Olympic games were held, Paul set off running one “stadia,” the length of the field.  At least two other men joined him.  Our guide told us that men from throughout Greece would compete for the honor of winning one of the many Olympic games.  And one woman, Cynisca, a Spartan princess, won the Olympic games around 460 BC, driving a four-horse chariot to victory.  Winners were honored with an olive branch, but also with large sums of money from their home city.  Athens, for example, granted a fortune of 500 drachma; other cities granted vats of olive oil, which was valuable throughout the ancient world.  Sculptors would create statues of Olympic victors and poets would sing their praise in odes. 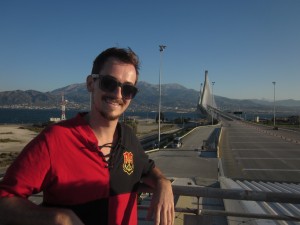 After visiting Olympia, our bus took us up the Peloponnese peninsula and along the Gulf of Corinth, which we crossed at the Charilaos Trikoupis Bridge.  We watched the sunset over the Gulf of Corinth. It was night when we arrived at the Amalia Hotel. In the morning we awakened and opened the door to the deck on the hotel.  We were rewarded by a magnificent view of the mountains and the hills stretching down to the Bay of Corinth.We were ready for our tour of the archaeological site of Delphi.