On December 2, my wife Bridget arrived from California, and I was able to introduce her to my colleagues from the Tantur Program. She participated in our farewell celebrations and prayers. The two of us visited Bethelehem on December 4 and the Old City of Jerusalem on December 5. Then we rented a car and drove to Galilee, staying in Nazareth and visiting Tabgha and Sevad. On December 9, Father Russ McDougall, the Tantur Rector, drove us to Tel Aviv on his way to the airport, from which we departed. In thinking about my time at Tantur, I remember the people we met who made a powerful impression. 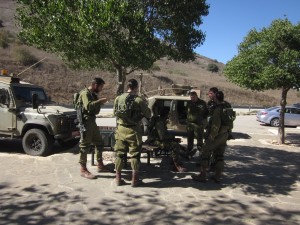 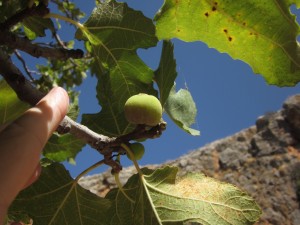 In the end, admired the courage and determination of the Jewish people to establish a state in the Holy Land and create a modern nation with well-educated and compassionate citizens. But I wondered how long the State of Israel, in securing its own Jewish citizens from terror, would consign its Palestinian citizens and residents to a second-class status. I also learned a lot about how we Christians relate to the Biblical and other religious sites in the Holy Land. 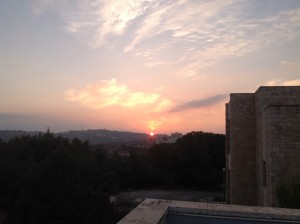 The sun sets behind Tantur.

Parents try to teach their children lessons of honesty, truthfulness, and kindness. We cannot see these things, but we believe in them and try to manifest them in what we do.  Similarly, the holy sites of this land are outward signs of God’s initiative.  Archaeology cannot tell us that Jesus was born in Bethlehem, that he exercised his ministry in Galilee, or that he died and rose in Jerusalem.  But the holy sites commemorate his birth, ministry, and destiny.  They are outward signs of a spiritual reality that cannot be captured in archaeological proofs.