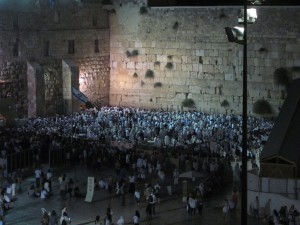 Yom Kippur ended with joy at the Western Wall.

This year the Day of Atonement fell on Wednesday, September 23. Twelve of us Tantur participants shared in the celebration by walking to the Western Wall in the evening. Jacqueline Mazoyer, Tantur’s Head Librarian, led our walk.The streets of Jerusalem were blocked to auto traffic, and we saw lots of bicyclists.  We set out at 4:00 PM, briefly stopped at the Monastery of St. Claire, and arrived at Mount Zion about 6:00.  There we visited the Dormition Abbey and its beautiful chapel, where the German monks chanted evening prayer. 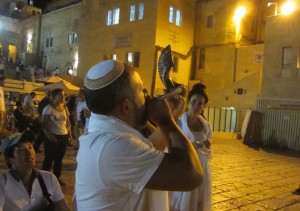 A reveler enthusiastically blew the shofar.

We left the abbey and walked to the Western Wall, where thousands of white-clad faithful had congregated.  At about 7:30, we heard the sound of the Shofar, the ram’s horn trumpet.  Raanan Mallek, a rabbinical student at Tantur, said that blasts of the shofar can revitalize the soul. If that’s the case, we were definitely revitalized, because we heard a lot of shofarim.  Numbers 10:1-10 describes how to play it.  Sometimes it takes a long blast, sometimes shorter octave jumps, and sometimes a series of short blasts. 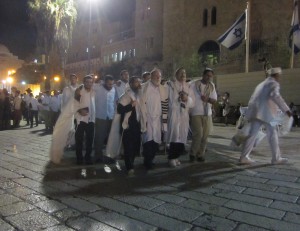 A cadre of men marched while they sang.

After the trumpets died away, the celebration was not over.  People who had fasted all day were still praying enthusiastically at the Western Wall. Tables had been set up with bottles of water and juice to refresh them.  Then a cadre of men walked through the crowd, marching in rhythm and singing. By this time we were tired, and Jacqueline led us into the Christian quarter, where we found a little restaurant that served salad greens with hummus in pita bread.  One of our number, John Conroy, expressed a wish for fried potatoes, so three plates of french fries appeared.  After that we walked to the bus which took us back to Tantur.