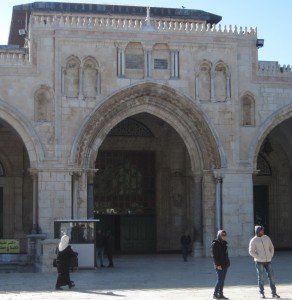 We removed our shoes to enter the mosque.

The Al-Aqsa Mosque started as a small prayer house built in the late seventh century by Caliph Umar, but was destroyed by an earthquake and rebuilt by another caliph in 754.  Over the years it has been destroyed and rebuilt many times, and the present structure dates from 1035, the time of Caliph Ali az-Zahir. The Crusaders captured Jerusalem in 1099 and used the mosque as a palace and the Dome of the Rock as a church. Their Islamic functions were restored after its recapture by Saladin in 1187. Al-Aqsa means “farthest,” and it refers to the Night Journey of Muhammad, in which he traveled from Mecca to “the farthest mosque” and then up to heaven to converse with God. 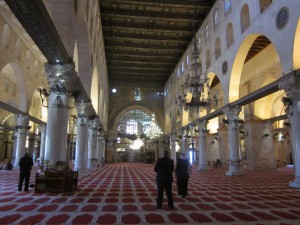 The interior of the mosque is vast and, when we visited, mostly empty.  Two men knelt and prayed.  Our guide brought us to the apse (unfortunately in scaffolding) and pointed to a beautiful “minbar” or pulpit with steps leading up to it.  He said that it was relatively new, that its wood had been carved in Jordan as a gift of King Hussein, and that it had arrived in many pieces and was assembled “like a Lego kit.”  It was beautiful and certainly complex, and I would have loved to be one of the assemblers. 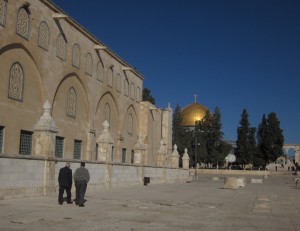 The dome can be seen from the mosque.

The sheer size of the mosque, with its vast carpet for worship and its rich decorations, made a deep impression. After we left, most of my friends went back to Tantur, but I stayed and strolled around the vast grounds, admiring the Al-Kas Ablution Fount and the Dome of the Chain. I also saw a large group of men engaged in what looked like Koranic Study.  The place was peaceful.  Who would have thought that this Noble Sanctuary could be a source of such strife?