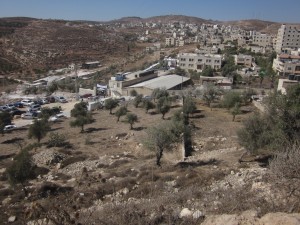 West Bank refers to the side of the Jordan River opposite from Jordan. Frequently it means the area adjacent to Israel that is under Palestinian control, including East Jerusalem. Most of the two million people living in the West Bank are Palestinian Arabs, but about half a million are Jewish Israelis, including about 200,000 Israelis living in settlements.  The international community considers the settlements illegal, but Israel disputes this.  After the 1967 war, Israel occupied much of the West Bank. So even defining the West Bank is complicated. 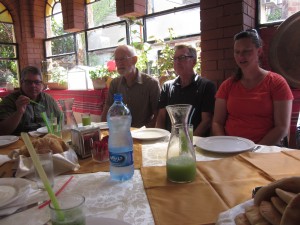 We Tantur residents visited West Bank communities on several occasions. The earliest was a trip on September 19 to Palestinian city of Taybeh, about twenty minutes outside of Jerusalem.  This Christian enclave is the home of Taybeh Beer, and on that weekend it was hosting an Oktoberfest.  Then on September 30 we traveled through modern Jericho to reach the ancient city of Jericho.  To learn more about Jericho, click this link.