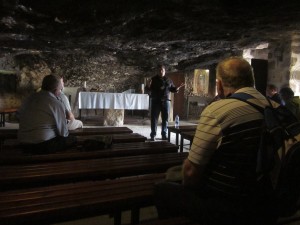 Our guide said that shepherds guarded their flocks in caves.

Before we visited the Church of the Nativity, we stopped at Beit Zahour, the Shepherds’ Field.  It is the Christian village where shepherds heard the angels sing “Gloria in excelsis Deo” at the birth of Jesus. Mary and Joseph laid him in a manger because there was no room at the inn (Lk. 2:7).  Our guide suggested that there were no inns for the poor at that time, only caves that sheltered animals. There the holy family took shelter. Beit Zahour is also the place where Ruth, the widowed Moabite woman, followed her mother-in-law Naomi. 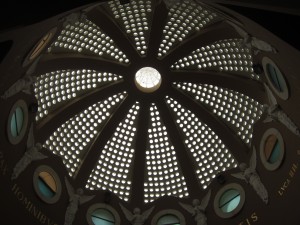 We sang under the ceiling of the angels’ chapel.

Above the cave is a chapel dedicated to the angels who sang at the birth of Jesus (Luke 2:14).  When we got there, we were the only visitors.  The chapel was high and built of stone.  In it, every sound reverberated.  And so, despite it being September and terribly hot and dry, we sang “Adeste fideles” and “Angels We Have Heard on High.”

After the visit to Beit Zahour, we drove to Bethlehem.  The tour bus parked in an underground garage, where directions to the holy sites competed with ads for U.S. franchises such as Kentucky Fried Chicken.  We walked to the Church of the Nativity, passing several Palestinian women who wore head scarves. 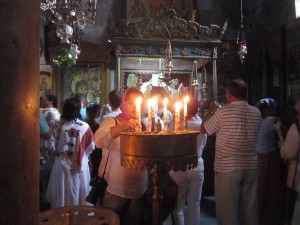 There were scores of tourists in front of the Basilica of the Nativity, reputed to be the oldest church in the Holy Land.  The Byzantine empress Helena created it after her baptism. Our guide brought us through the “humility door” into the basilica, whose interior was in scaffolding. Pilgrims at the main (Greek Orthodox) part of the church were praying.  At the next-door Roman Catholic Church of St. Catherine, Franciscans gave us lighted candles and we climbed into the grotto where tradition says that Jesus was born. 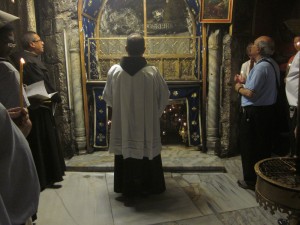 A Franciscan led us in the Our Father.

One of the Franciscans lit a censor, and the grotto — already filled with smoke from our candles — began to smell of incense. Led by the Franciscans we chanted the Pater Noster and reverenced the birth site, marked by a 14-pointed silver star. Millions have shared this same act over the centuries, emerging from the cave to return home and describe what they have seen at Bethlehem.  No one person has the fullness of the experience. We build on the experiences of others and make sense of them in our own ways.

After the visit, we had lunch just off Manger Square.  Then we returned to the bus and traveled to a wind-swept farm known as the Tent of the Nations.