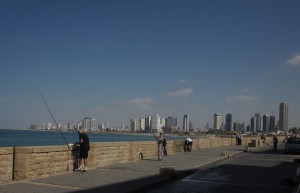 From Jaffa we could see Tel Aviv.

On October 21 the Tantur group journeyed to Jaffa and Tel Aviv to learn about the evolution of relationships between Palestinians and Israelis.  We had two guides: Leil Maghen, a Jew, and Husam Jubran, a Muslim.  Throughout the 1920s, they said, European Jews emigrated to Palestine, pursuing the dream of a national home for the Jewish people as expressed in the 1917 Balfour Declaration. But in the 1930s, when the British began to limit Jewish emigration, the Zionists turned against them. In 1948 they declared the independence of Israel from the British Mandate and established the Jewish State. 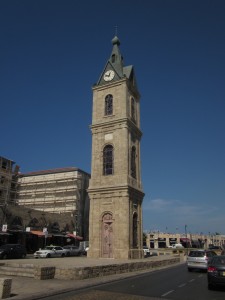 The tower dates from Ottoman times.

Prior to 1948, there were occasional clashes between Palestinian Arabs and Jewish immigrants, notably in 1936, when 9 Jews were killed and 40 wounded in an Arab attack on Jaffa. But for the most part, during the 1920s and 1930s, European Jews purchased property legally in Palestine (often through the Mizrahi or indigenous Jews of the land) and lived peaceably. After Independence, war broke out and Arabs viewed the Jews as a European-style occupying power. In 1948, 100-254 Arabs were killed by the Israeli militias at Deir Yassin. Some militias pursued a deliberate policy of moving Palestinian Arabs away from lands and villages that were of strategic importance, such as the Port of Jaffa. There Israeli forces caused the majority of Arab Palestinians, to leave the city. This exodus was copied throughout Israel and was called the “Nakba” or “disaster.” 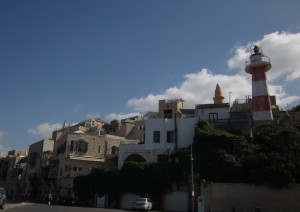 We walked through the Ajami District.

About 4,000 remaining Muslims were concentrated in the Ajami district of Jaffa. Many Muslims relocated to the nearby city of Lod, hoping to wait out the occupation of Jaffa. The Muslims took the keys to the doors of the Jaffa dwellings, hoping to return. Even today, in Muslim families, the keys to the homes where Muslims used to live are handed down from parents to children.

We visited two different neighborhoods, one in Jaffa and one in Tel Aviv. In Jaffa’s Ajami district, we learned that Israel offered incentives to the “Mizrahi” to move into homes that had belonged to Muslims. Eventually, however, Jaffa real estate became expensive, and wealthy people have now moved into Ajami, displacing the Mizrahi. 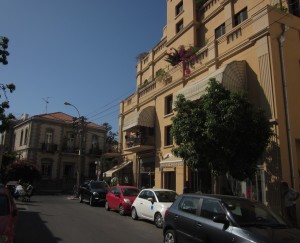 We also visited Neve Zedek in Tel Aviv, the first Jewish neighborhood to be built outside the old city of Jaffa. As Tel Aviv grew up around it, Neve Zedek was neglected and fell into disrepair. Since the early 1980s, it has become gentrified, and is now fashionable and expensive.

Our final stop of the day was at Tel Aviv City Hall. There in 1995 Yitzhak Rabin, the politician, statesman and general, was murdered by a right-wing Orthodox Jew, Yigal Amir. 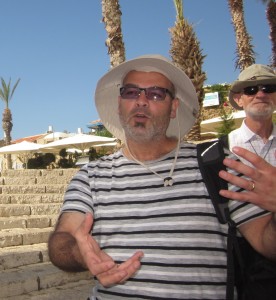 Husam Jubran spoke as a Palestinian.

As Prime Minister (1974-77 and 1992-1995) Rabin signed several historic agreements with the Palestinian leadership as part of the Oslo Accords. In 1994, he won the Nobel Peace Prize (with Shimon Peres and Yasir Arafat). Rabin also signed a peace treaty with Jordan in 1994.

When the first Intifada began, Rabin adopted harsh measures to stop the demonstrations, and was known as the “bone breaker.” Eventually, however, his policies created a poor international image for Israel. The U.S. recognized the PLO as the representative of the Palestinian people. This forced Rabin to negotiate with the PLO. This initiative came to an end after Rabin’s assassination in 1995. 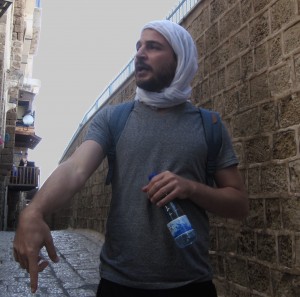 We ended on a somber note.  We had traced a lot of Israel’s history, and seen how difficult it is to find a way to peace in Palestine.