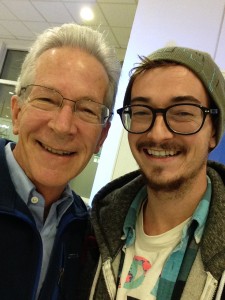 I was relieved to meet Paul at the airport.

Greece too is a “holy land” that has shaped our understanding of reality and of Jesus Christ.  On October 25 I met my son Paul in Athens for a one-week tour of classical Greece. Tantur schedules a “free week” at the end of October, so I had planned the trip in the USA.  Paul had flown from Morocco, where he is a Peace Corps Volunteer, arriving in Athens about 11:00 PM.  A driver from the tour company took us to the Golden Age Hotel downtown.  We checked in at midnight, and went promptly to bed — the tour bus was leaving at 7:30 AM. On our first day, Stathis Tsantekídes, our guide, led us to the Corinth Canal, which connects the Bays of Athens and Corinth. After photographing the canal, we drove to the Argolid region to see the ruins of Mycenae and Epidaurus. We ended our day at the Amalia Hotel in Nauplion. 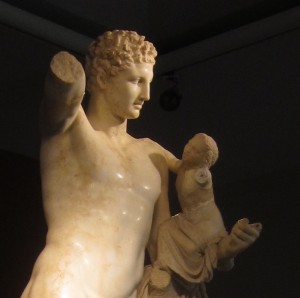 The Hermes of Praxiteles is in Olympia.

On our second day we traveled west to Olympia, which was the site of the Olympic Games in classical times.  There we visited the Olympic Stadium where the first Olympic festival was organized in the eighth century BC.

We awakened on the third day at Delphi.  We first visited the three-column “tholis” or circular temple of the Athena Pronaia.  Then we climbed above the Castalian Spring into the temple complex whose center is the Temple of Apollo.  This is where representatives of the cities of Greece would come to present their questions to the Delphic Oracle. 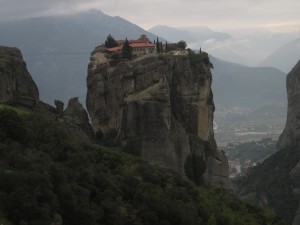 Trinity Monastery is one of six in Meteora.

After visiting Delphi, we drove to Kalambaka, arriving in the evening.  Our fourth day included a tour of the monasteries of St. Stephen and Varlaam. These are two of six monasteries in the area known as Meteora, meaning “suspended” between heaven and earth. It is the second largest monastic site in Greece (after Mount Athos).  The monasteries perch upon sandstone rock pinnacles above the town, and testify to the monks’ desire to rise above ordinary worldly life.

The fifth day brought us back to Athens for a half-day tour of the city, especially the Acropolis, and an afternoon visit to the National Archaeological Museum.