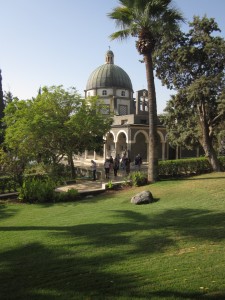 Tabgha is the site of the Church of the Beatitudes, our first destination on Wedneday, October 14.  We drove from Nazareth through Cana, and then to ancient Migdol (connected with Mary Magdalen), before the bus climbed the Mount of the Beatitudes. There the Franciscans have a beautiful garden with a chapel overlooking the Sea of Galilee.  The chapel, commissioned by Benito Mussolini and designed by Antonio Barluzzi, was completed between 1936 and 1938.  It has eight sides, one for each of the eight beatitudes, and clear windows that look out over the water.  It is a popular pilgrim destination, with many tour buses, a busy visitor center, and guides waving flags.  I even saw a middle-aged woman, seated at a bench, singing a hymn in Spanish, and accompanying herself on the guitar.

A Tabgha pilgrim lights a candle.

We drove down the hill and, in a few minutes, we came to the Tabgha Church of the Multiplication of the Loaves.  This stone church was opened in 1982 and built over the ruins of previous churches, the first of which dates from the fourth century, according t0 the Spanish pilgrim Egeria (writing around 380).  The new church incorporates the mosaic floors from the fifth century, including a mosaic of loaves and fishes.  We also saw fire damage from a 2015 arson attack committed by Jewish extremists who left Hebrew graffiti with the words, “the false gods will be eliminated.”  Israeli officials have labelled the attack as “terrorism” and agreed to compensate the German foundation that governs the church.  Four Israeli youths were arrested by the police and charged with arson. 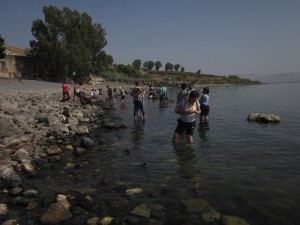 Pilgrims wade at the Church of St. Peter.

Our next stop was the nearby Church of the Primacy of St. Peter.  The church contains a projection of limestone rock in front of the present altar which is venerated as a Mensa Christi or “table of Christ.” According to tradition this is the spot where the resurrected Jesus laid out a breakfast of bread and fish for the Apostles, and told Peter to “feed my sheep” after a miraculous catch (Jn. 21:1-24). Whether or not it is the spot, many people came to wade in the Sea of Galilee.  Later, we went to Capernaum and took a brief cruise on the Sea of Galilee.