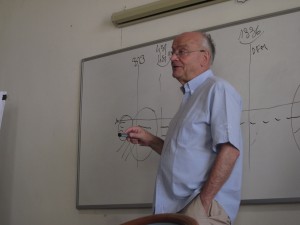 Born in Belgium, Frans Bouwen is a member of the Society of Missionaries of Africa (White Fathers).  He has lived in the Old City of Jerusalem since 1969. He is editor of the periodical “Proche-Orient Chrétien”, specialised in the history, tradition and present life of the Churches in the Middle East, with a special emphasis on ecumenical and interreligious relations. Father Frans lectured us two times:

He is a consultant to the Pontifical Council for Promoting Christian Unity in Rome, and a member of the Joint International Commission for Theological Dialogue with the Orthodox Church as well as of the International Commission for Theological Dialogue with the Oriental Orthodox Churches. He is at present also vice-moderator of the Commission on Faith and Order of the World Council of Churches. He is active in various ecumenical and interreligious dialogue groups in the Middle East and in Jerusalem, and for many years was the president of the local Justice and Peace Commission of the Catholic Church in Jerusalem.