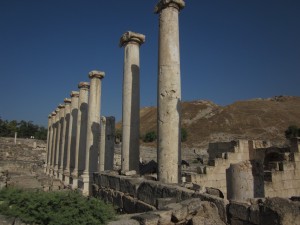 The Byzantine acropolis was on the heights above.

On the morning of October 16 we drove from Tiberias to Beth-She’an, where Byzantine-era ruins have been excavated and preserved in a national park.  But Beth She’an has been inhabited as long as 7,000 years.  The Greeks had named it Scythopolis after the Scythian mercenaries who once populated it.  In Byzantine times (AD 330-636) the city was Christian.  The ruins we saw testified to its opulence at that time. But the Galilee earthquake of 363 destroyed the city, and some of its columns have been left just as they fell. 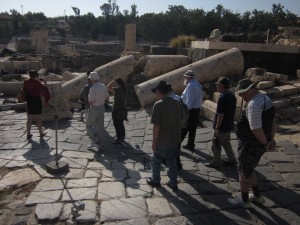 Columns topped during the earthquake of 363.

Beth She’an figures in the Old Testament, where we read that the Philistines took it from the Canaanites in 1100 BC.  Saul, Israel’s first anointed king, was defeated by the Philistines at nearby Mount Gilboa.  They hung his body on the city walls (1 Sam. 31). Later, King David captured Beth She’an from the Philistines, pushing them back to the sea.  Still later, Beth She’an is described as a district belonging to Solomon (1 Kg. 4:12). Eventually, the Assyrian King Tiglath-Pileser III (732 BC) destroyed the city by fire. 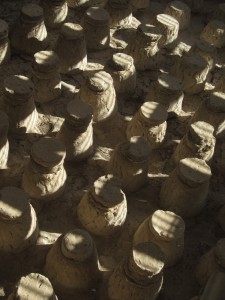 We felt fortunate to visit the city on a pleasant October day, for the summer heat at Beth She’an is legendary. But the Byzantine city must have needed heat in winter.  We learned about this when we toured the ruins of the public bath. Short columns, once surrounded by heated water, supported a marble floor.  The water warmed the floor so that bathers wouldn’t catch a chill.  We could see the short columns, and imagine how the citizens must have lived 1400 years ago.

After our tour of Beth She’an, we returned to our bus and drove to Mount Tabor, the traditional site of the Transfiguration of Jesus.