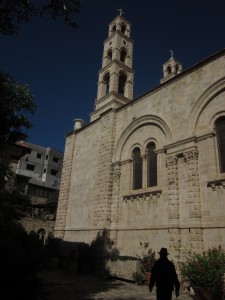 This church stands above Jacob’s well.

Nablus is a city known in the Bible as “Shechem” or “Sychar,” and we visited it on November 14.  Nablus is the site of Jacob’s well, where the patriarch, after meeting his brother Esau, “arrived safely at the city of Shechem, which is in the land of Canaan, when he came from Paddan-aram” (Gn. 33:18).  We visited the Greek Orthodox Church.  Under its altar the well still stands, and we pulled up a bucket of its water. The site is also connected with the story of the Samaritan Woman in the Gospel of John (4). After meeting Jesus, she says, “Come see a man who told me everything I have done. Could he possibly be the Messiah?” The woman at the well is known in the Greek Tradition as “St. Photini,” because she “illuminates” the messianic identity of Jesus, and today the church is called St. Photini. 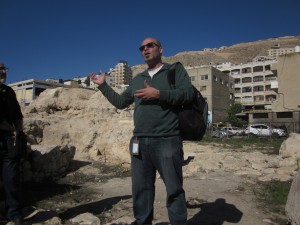 We drove to Tel Balata, a site associated with the biblical city of Shechem between Mount Gerizim and Mount Ebal. There Abram built an altar (Gen. 12), Joshua swore his adherence to the Law of Moses (Jos. 24) and Rehoboam had a chance to be king over the united kingdom.  He laid such heavy burdens on the people, however, that the northern tribes rebelled. Under Jeroboam they established in Shechem a separate kingdom of Israel. Rehoboam had to flee to Jerusalem as King over Judah alone (1 Kg. 12). 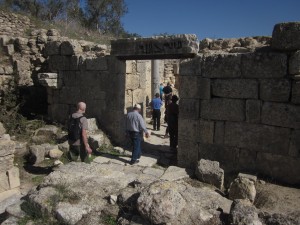 The ruins of ancient Sebastia sit on a hill.

We journeyed through Nablus to Sebastia, the ruins of an ancient city built up by King Herod the Great and named for Augustus Caesar.  The ruins represent six cultures: Canaanite, Israelite, Hellenistic, Herodian, Roman, and Byzantine.  King Omri, one of the successors of Jeroboam, bought the site from a man named “Shemer” (1 Kg. 16:24), so it became known as Shomron. Omri’s son Ahab, who had an “ivory house” built (22:39), conspired to steal the vineyard of Naboth with his wife Jezebel. 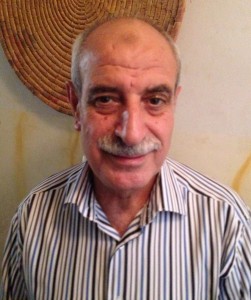 Sheik Zuhair met us at his apartment.

Our guide, Husam Jubran, had made an appointment for us to meet Sheik Zuhair Dubee, an Islamic leader in Nablus, so we drove to the Sheik’s house. He told us that his parents were forced out of Lod during the 1948 war.  As a boy, he was befriended by the Christian nuns who ran the Nablus orphanage.  He was active in the Palestinian resistance as a young man, and was in prison for seven years, where he became the leader of Friday prayer.  When he was released, the Islamic authorities made him a khattib or religious leader.  He told them that he planned to visit the city’s church pastors on Christmas. They thought that such interreligious cooperation was very strange, but it has been a mark of his ministry throughout his life. 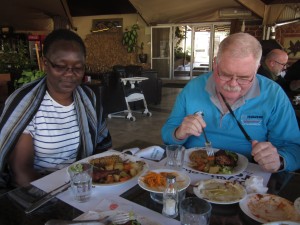 After our meeting with the Sheik, we had lunch at the Tanoveen Restaurant in Nablus, where the dining room roof was like a tent.  The owner served chicken that had been slow cooked in a pit, and the meat fell off the bone.  We had a Middle Eastern confection named kunafeh for desert, which everyone loved.  Later, in the old city of Nablus, we found a shop where kunafeh was produced, and so we had a chance to see the creation of this cheese-based dessert.  It was a delight to walk through the old city and catch a glimpse of the “old Middle East.” 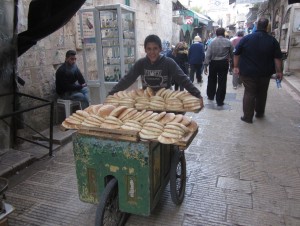 A boy delivers bread in the old city.

Our last stop of the day was at the Anglican Church of St. Philip for a conversation with Father Ibrahim Nieroz. He told us about how the Christian population of Nablus had shrunk, and he explained why he rejected the two-state solution as an answer to the Israeli-Palestinian problem.  He likened it to the biblical story of Solomon.  He had proposed cutting an infant in two and giving half to each of the two women who claimed to be the baby’s mother.  Cut in two, he said, the land would be dead.  Ibrahim gave us a lot to think about.