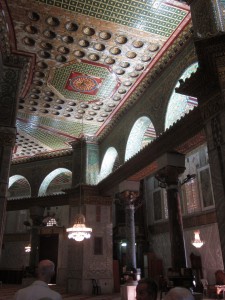 The interior includes inscriptions pertaining to Mary and Jesus.

We entered the Dome of the Rock through an enormous door.  We found ourselves in a spacious place that was being vacuumed for the day’s visitors. The dome covers the rock identified with Mount Moriah, the site where God tested Abraham by asking him to kill his son. Moreover, Muslims believe it to be the site of the Islamic miracle of the “Night Journey,” or Isra and Mi’raj in the year 621. In the Isra part of the journey, Muhammad traveled on his mythical steed Buraq to “the farthest mosque” (al-Aqsa) where he led Abraham, Moses, and Jesus in prayer.  In the Mi’raj journey, he ascended to heaven and spoke to God. God told Muhammad that his followers were to offer prayers fifty times a day. Muhammad returned to God who eventually reduced the prayer to ten times, and then five times a day. 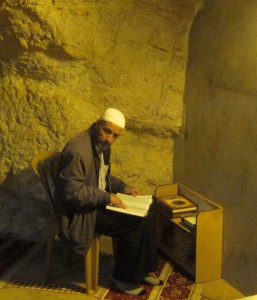 A man prays in the grotto.

The dome stands over the rock of Abraham’s test, but that part of the mosque was in scaffolding, so the guide led us into the grotto beneath the rock.  The Qur’an does not name Abraham’s son, but Muslims believe that he was Ishmael (the founder of the Arab people) rather than Isaac. Here Muhammad was taken by the Angel Gabriel to pray with Abraham, Moses, and Jesus. When we were in the grotto beneath the rock, we saw a man, praying by himself. Muslims revere Jesus as a true prophet, but not as the Son of God. The interior is decorated with the prayer: “O Lord, send your blessings to your Prophet and Servant Jesus son of Mary.” This suggests that, when the dome was erected, Islam vied with Christianity for popular belief. 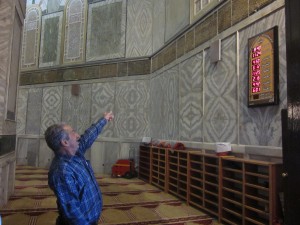 A signboard indicates sunrise and sunset.

The dome, which is maintained by the government of Jordan, can be seen from miles away. In 1993, the golden covering was refurbished following a donation of $8.2 million by King Hussein. He sold one of his houses in London to fund the 80 kilograms of gold required for the job. We were fortunate to be able to visit this beautiful structure and to walk through its spacious grounds.  We would have stayed longer, but our guide invited us to go from the dome to the al-Aqsa Mosque.