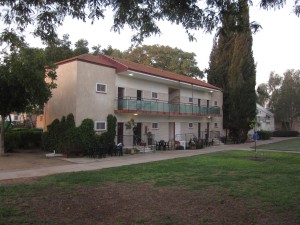 We saw the kibbutz residence at dawn.

At nightfall on November 18 we arrived at Kibbutz Mashabei Sadeh.  We had been in the lowest spot on earth, and some of us had even tried floating in the Dead Sea.  Then our bus climbed the mountains to the Negev Desert kibbutz, less than 40 minutes from the Gaza Strip. Life was austere in 1947, when the kibbutz was new.  Avigail, a 40-year kibbutz veteran and mother of five, said that her children went to the nursery as soon as she weaned them, so she could go back to work. 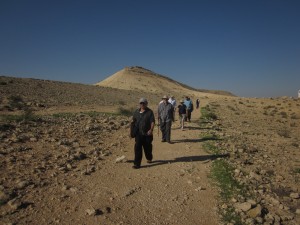 We walked to the Makhtesh Gadol overlook.

After our breakfast on November 19, we drove to a plateau overlooking the Makhtesh Gadol.  We read how Elijah, hiding in the Negev, encountered natural  phenomena, but did not encounter God. Then something happened. “After the earthquake a fire; but the LORD was not in the fire: and after the fire a still small voice” (1 Kg. 19:12).  He “heard” God’s voice.  We were in a seemingly lifeless desert. But even as we walked to the vista point, we could see see green plants forcing their way out of the earth. 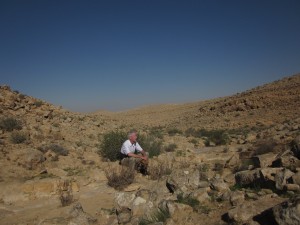 In the wadi I found shallow pools of water.

I made my way alone down a wadi. Rainwater had worn away the topsoil and exposed the underlying limestone.  It was still early enough that there was dew on the plants, and in low spots on the rock, I could even see shallow pools of water. The experience of Elijah was far from me, but I had often looked out of the bus window and imagined what it might be like in the silence of the desert.  This was the closest experience I was going to have. Eventually I made my way back to the others and we drove to Beer-Sheva.