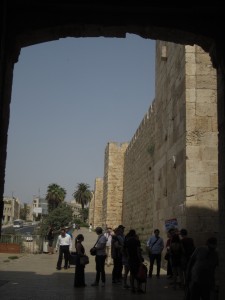 On Sunday, September 13, I entered the Christian Quarter of the Old City of Jerusalem for the first time.  The other Tantur participants and I left the institute at 8:00 AM, and in ten minutes the tour bus dropped us at the Jaffa Gate, closest to the Hebron Road.  It is one of the seven gates into the Old City. The Jaffa Gate pierces the 40-foot walls to the city. They were built between 1535 and 1538, when Jerusalem was part of the Ottoman empire under Suleiman I.  As we approached the gate, a young Hasidic man, dressed all in black and wearing long sidelocks, pedaled furiously by us, passing us on the side.  His bicycle hit the curb, and he fell.  We rushed over to help him, but he immediately got back up on the bicycle and pedaled through the Jaffa Gate. 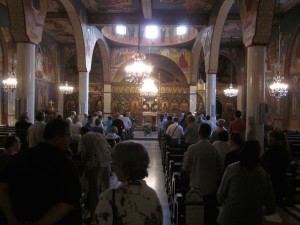 Mass was celebrated in Arabic at the Greek Catholic Patriarchate.

This particular Sunday we were going to the Greek Catholic (Melkite) Patriarchate for Mass in Arabic.  We turned up Patriarch street and entered a door that seemed too plain to be the door of a Church.  After crossing a vestibule, we entered the church, and were fascinated to see paintings of Jesus, Mary, and the saints covering the walls and ceilings.  Although Mass had not begun, the small choir of eight or nine was already singing.  I sat behind them, and marveled at their strong, tuneful, unaccompanied voices. 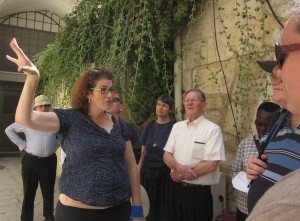 Hana Bendcowski led us on a walking tour of the Christian Quarter.

After Mass we joined an Israeli guide, Hana Bendcowski, an expert in the Christian history of Jerusalem.  She led us in a walking tour of the Christian Quarter.  With a wide knowledge of the history of Jerusalem, she explained how Protestants, Catholics, and Jews have competed to offer services to the faithful.  The result?  Jerusalem has a magnificent infrastructure of schools, hospitals, orphanages, and homes for the elderly.  Please accompany me on a tour of the Christian Quarter, focusing on the Greek Catholic Mass and the Holy Sepulchre.