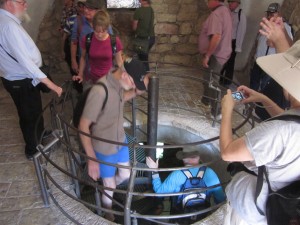 We descended the circular stairs to Hezekiah’s tunnel.

After the northern Kingdom of Israel was defeated by the Assyrians in 721 BC, many refugees came south to the Kingdom of Judah. King Hezekiah established them in a new neighborhood to the west of the ancient City of David.  Then, around the year 700, Sennacherib, the Assyrian King, besieged the city, drawing on the city’s water source, the Gihon Spring. King Hezekiah stopped the water from flowing to the Assyrian besiegers (2 Chr. 32:2-4).  He then ordered his engineers to dig a tunnel that would transport water to the refugees’ neighborhood. 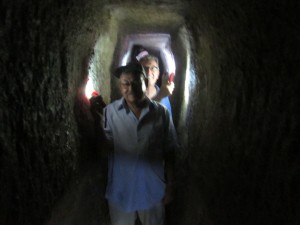 We waded through Hezekiah’s tunnel.

Armed with flashlights, a group of us decided to walk the 1500 foot tunnel. Water still flows through it, and we got wet up to our hips.  The tunnel was about three or four feet wide.  It meandered a little to the left and right, but there were no serious bends until the middle. We couldn’t get lost. I was afraid that there might be some drop-offs, but I didn’t encounter a single one. The surface was absolutely flat.  At the beginning, we had to bend over because the ceiling was low.  At the end, the ceiling rose to 30 feet. 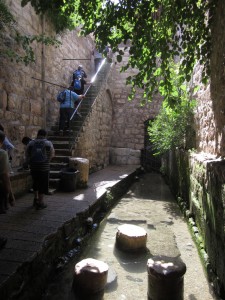 Near the Pool of Siloam Jesus cured the man born blind.

The tunnel was an amazing feat of engineering.  By constructing it, Hezekiah was able to deprive Sennacherib of water, and his army abandoned the siege of Jerusalem.  The pool into which it empties is called Siloam.  John’s Gospel tells us that Siloam means “sent.”  The water had been sent from Gihon.  After Jesus cured the blind man, he told him to wash his eyes in the pool (Jn. 9:7). It was the sabbath.  When we emerged from Hezekiah’s Tunnel, the light was blinding.  We had been in the darkness for about fifteen minutes. It was easy for us to appreciate the gift of sight.  One would willingly break the command to honor the sabbath in order to bring clear vision to someone in darkness.