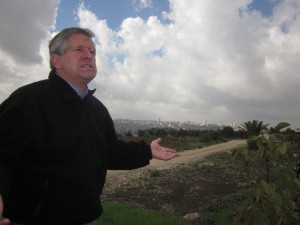 Mark Brown told us about the hospital’s mission.

The Lutheran World Federation Regional Representative, Rev. Mark Brown, gave us a tour of Augusta Victoria Hospital on November 10.  The hospital, the second largest in East Jerusalem, cares for Palestinian refugees.  It was first built in 1907 as a center for German Protestants in Jerusalem and named for the wife of German Kaiser Wilhelm II, who visited Jerusalem in 1898.  After World War II, the British converted it into a civilian hospital.

Brown told us that the 118-bed hospital links the isolated communities of Palestinian refugees in the West Bank and Gaza, bringing thousands of patients from those communities into Jerusalem for treatment.  As an advocate for refugees, he said that in 2014 more Palestinians were displaced due to housing demolitions and other measures than in any year since the United Nations began tracking displacements.  And in that same year, 2,314 Palestinians were killed as a result of conflict-related violence, compared to 87 Israelis. Brown complained that Israel impedes Palestinian access to services, disrupts family life, and undermines livelihoods in the territories that it has occupied — and continues to expand settlements and extend its land holdings. 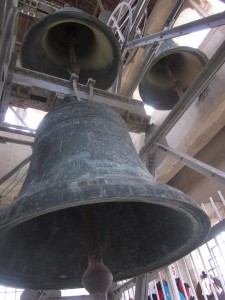 These bells rang out at noon.

Brown also spoke proudly of the hospital’s achievements.  When it began to specialize in cancer care, he said, almost 70% of patients seeking breast cancer treatment were in the late stages of the disease and required palliative care.  In 2010, the hospital developed a mobile mammography clinic which has reached out to Palestinian communities, offering women scans and teaching them how to examine themselves for breast cancer. By 2014, however, the number of breast cancer referrals for palliative care had shrunk to 52%.  Moreover, more than 2,000 diabetes patients receive treatment including dialysis.  The hospital is close to receiving permission to build a new geriatric wing. All of this, said Brown, is grounds for hope.  After our tour, we walked down the Mount of Olives.