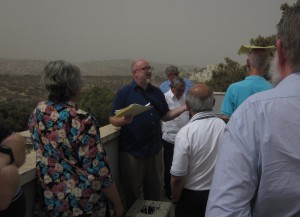 One can see Bethlehem from Tantur — and also the Israeli settlement of Gilo.

An excursion to Bethlehem was the high point of our second day at the Tantur Ecumenical Institute in Jerusalem, September 10, 2015. The previous day we had seen Bethlehem from the roof of Tantur. It’s just a twenty-minute walk, but it requires crossing an Israeli checkpoint, because Bethlehem is administered by the Palestine Authority. Today we traveled there by bus. We did not go to Bethlehem first, however. Instead we visited Herodium Park, about ten miles from Tantur. 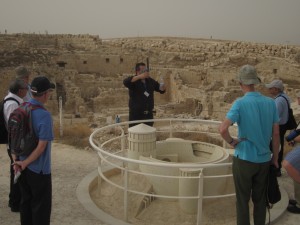 Elias Ghareeb, our guide, showed us a model of Herodion at the fortress site.

Herodion is the site of the fortress and mausoleum of Herod the Great, who died shortly after the birth of Jesus. The mausoleum is on a mountain so high that it can be seen from Tantur. It was Herod the Great who, in his eagerness to destroy the infant king sought by the wise men, slaughtered the innocents of Bethlehem (Mt. 2:16). The remains of a large tomb and opulent coffins were discovered at Herodium in 2007, solving the mystery of Herod’s burial place. After visiting the park, we drove to Beit Sahour, the City of Shepherds. 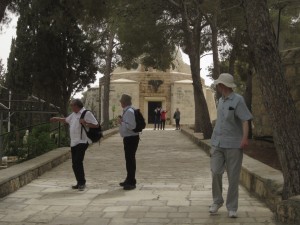 We walked to the chapel at Beit Sahour, the place of the shepherds.

Beit Sahour is one of a trio of traditionally “Christian” towns (including Bethlehem and Beit Jala), even though the majority of people in the area are Muslims. Beit Sahour is the supposed place from which the shepherds came to adore the newborn baby Jesus. From there we drove to the Church of the Nativity, and climbed down into the subterranean cave where Christians venerate the birthplace of Jesus. After lunch, we drove past the Dheisheh Refugee Camp. It was established in 1949, and now houses some 8700 people. 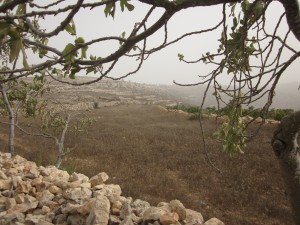 The hillside farm of the Nassar family is terraced and covered with olive trees.

We eventually reached a hillside farm owned by the Palestinian Nassar family since 1916. The farm, called the “Tent of Nations,” is located between two Israeli settlements. Israeli settlers have tried unsuccessfully to annex the Nassar farm. We spoke with Daoud Nasser, whose mission is to protect his family’s land.

So I invite you to join me on a visit to Herodium Park, then on to Bethlehem, and finally to the Tent of Nations.