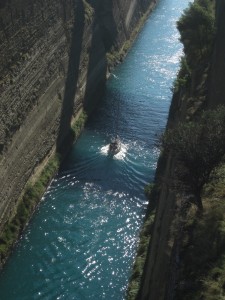 On October 26 we drove from Athens to the Corinth Canal.  Completed in 1893, it connects the Gulf of Corinth with the Saronic Gulf in the Aegean Sea, separating the Peloponnese (the large peninsula in the south) from the Greek mainland.  This allows ships — at least narrow ships, for the canal is only 21 meters wide — to sail from the Aegean to the Ionian Sea without the long detour around the Peloponnese.

We then entered Argolis, the region of Greece that consists of the eastern part of the Peloponnese peninsula.  It took its name from the region’s principal city during the Archaic and Classical periods, Argos, which is discussed in the Iliad and connected with the character of Diomedes. 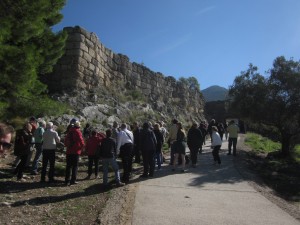 Mycenae had an enormous defensive wall.

We then drove on to Mycenae, a fortified city in Argolis.  In the Bronze Age, it was a military stronghold that dominated southern Greece.  Mycenae gave its name to the period of Greek history from 1600 to 1100 BC. We entered the city through the Lion’s Gate.  The city was excavated by Heinrich Schliemann, the German historian, who in the 1870s thought he had found in a Mycenaean tomb the “mask of Agamemnon.” To him it was the key to understanding the king’s death at the hands of Clytemnestra. 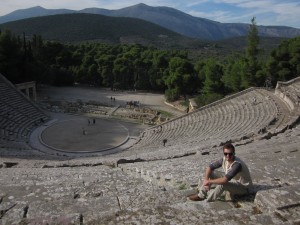 Later in the afternoon we visited Epidaurus, the theater designed by Polykleitos in the fourth century BC. The theater is close to the nearby “asclepeion” or healing center with its mineral springs. People would come to Epidaurus for a cure, hoping that Asclepius, the healer-god of antiquity, would advise them and cure them. The cult of Asclepius drew many people to Epidaurus and so enabled the construction of the theater.  The next day we set off to visit Olympia, the original site of the Olympic Games.