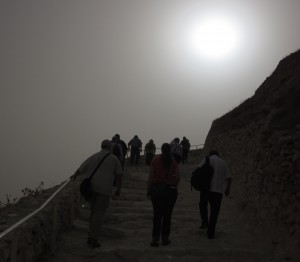 The sun blazed through haze as we climbed to the top of Herodium.

No one knew where Herod the Great was buried until 2007, when Ehud Netzer discovered the tomb at the top of a man-made mountain not far from Bethlehem.  Netzer was a renowned scholar of Herod’s architecture, and served at the Hebrew University Institute of Archaeology.  The site had been identified in 1838, and Netzer helped develop it as a national park.  He died after falling at the excavation.  When we arrived, we climbed to the top of the mountain.

Herodium is the taller mountain to the right.

From there we could see that Herod had intended not just a mausoleum but a fortress.  It had high walls, four enormous towers, a hillside amphitheater, and four cisterns that could hold thousands of gallons of water.  Against the lower walls, Herod’s architects had piled tons of rock, ensuring that Herodium would be seen as an artificial mountain.  Elias Ghareeb, our guide, wondered whether Jesus might have been thinking of Herodium when he said that faith could move mountains.  Even today the mountain on which Herodium sits is higher than the surrounding hills.

A system of tunnels at Herodion ensured that its inhabitants would be safe and provided with water.

When the Jews revolted against the Romans in the year 66, the rebels dislodged the site’s Roman governor and used Herodium as their fortress. They built a synogogue and created various pools  for ritual bathing.  They were not defeated until the year 71, after the Romans had destroyed the Jerusalem Temple.  In the Byzantine centuries (4th-7th), monks lived at Herodium and built a church, whose remains can be seen to this day.

After our visit, we drove to the Shepherd’s Field and the Church of the Nativity.