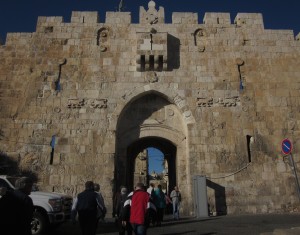 We entered the Old City at the Lion’s Gate.

On November 24 we entered the Muslim Quarter through the Lion’s Gate and walked to the Noble Sanctuary. Known in Arabic as the Ḥaram al-Šarīf, the Sanctuary marks the place where Abraham was tested by God.  It is a 36-acre site dominated by monumental structures from the Umayyad period, the time of the third Muslim caliph, Uthman ibn Affan (about 650 AD).  The Dome of the Rock and the adjacent Dome of the Chain caught our eyes first, and then we saw al-Aqsa, the third holiest mosque in all Islam. 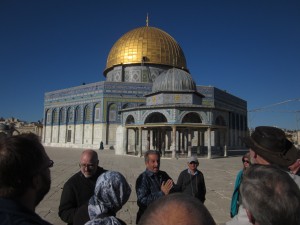 Our guide described the domes of the Sanctuary.

At the entrance, our guide (a friendly man who knew the Tantur Institute) jokingly asked, “Are any of you bringing knives and guns?”  Since October 1, when an Israeli couple was shot by Hamas militants near Beit Furik, there have been many stabbing attacks by terrorists, mainly in the Old City and in East Jerusalem.  From October 1 to November 23, twenty Israelis and 86 Palestinians had been killed. We feared that we might never visit the Noble Sanctuary, so we appreciated our guide’s warm welcome.

The size, magnificence, and history of the Sanctuary made a powerful first impression. We arrived at 8:00 in the morning, when there were very few visitors. In 637 Arabs captured Jerusalem from the Byzantine Empire.  Some years later the Rashidun Caliph Umar built the Al-Aqsa Mosque, and in 691 an octagonal Islamic building topped by a dome was built by the Caliph Abd al-Malik around the site of the binding of Isaac.  The entire Noble Sanctuary is considered a mosque. It contains many beautiful buildings, such as the Qayt Bay Fountain, named after Qaitbay, the Sultan of Egypt.  He build it in the fifteenth century so that pilgrims might wash before worshiping.  Wikipedia says that it  has been called “the most beautiful edifice in the Temple Mount” after the Dome of the Rock itself. 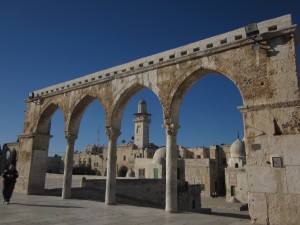 From the minaret issues the call to prayer.

The Noble Sanctuary is contested by Jews and Muslims because it is also the site of Solomon’s Temple, built on land purchased by King David.  The First Temple was destroyed by the Babylonians in 587 BC and the Israelites were taken into exile.  When they returned, they built a Second Temple, which was destroyed by the Romans in AD 70.  So the question of the rightful owner — Muslim or Jew — is hotly debated.   We removed our shoes and our guide took us within the Dome of the Rock.