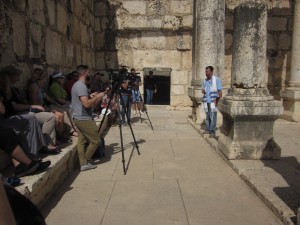 A Christian evangelist preaches to the camera.

After visiting Tabgha on October 14, we traveled to Capernaum, a village on the Sea of Galilee since the second century BC.  There a modern church has been built over what tradition calls the home of St. Peter.  Capernaum also has two ancient synagogues.  We read in Mark 3:1-6 that Jesus cured a man with a withered hand in the synagogue, angering the Pharisees who thought he was breaking the sabbath.  When I was there, a Christian evangelist, wearing a yarmulke, was exhorting his followers while cameras recorded him. 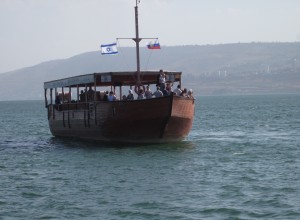 Our tour boat sailed the Sea of Galilee.

After that we visited the Yigael Alon Museum to see the Galilee Boat, whose discovery was very interesting.  In January 1986, two brothers who were fishermen from Ginosar — called Gennesaret in Jesus’ day — discovered a boat that had been buried in the mud for 2,000 years. Curators carefully preserved the boat, cataloguing the various woods from which it was made.  The boat is now displayed, along with a model that shows what it might have looked like at the time of Jesus. 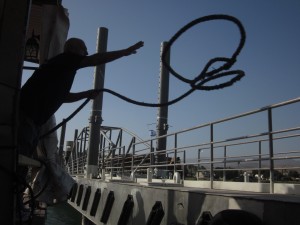 The deckhand heaves a line to tie up the boat.

We then walked behind the museum to a wharf and embarked upon a cruise on the Sea of Galilee.  It was a beautiful afternoon, and we reflected on what we had seen at Tabgha and Capernaum. After the boat trip we made a brief stop at Migdol.  The Legionnaires of Christ have been developing a center dedicated to Mary Magdalen, and uncovered an ancient synagogue.  Now they must excavate it before the center can open.  We arrived at the Casa Nova Hostel in Tiberias to relax before our next day’s trip to Tel Dan and the Golan Heights.