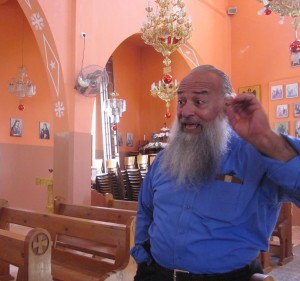 Wikipedia says that Taybeh is the last all-Christian community in the West Bank. In 2007, it had 1,452 inhabitants.  I spoke with Father Jacq Abed, who for the last 25 years has been pastor of the Greek Catholic (Melkite) Church of St. George. He said that he has 200 congregants. But straitened times can sometimes create friendships.  He concelebrates with the Latin Rite and the Greek Orthodox pastors of the town.  It isn’t easy to support three churches with a total population of 1,452 souls. 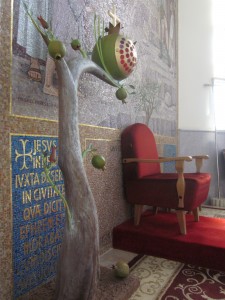 The Latin Church of Christ the Savior has a pomegranate sanctuary lamp.

Taybeh is mentioned in the Bible, but not as Taybeh. In the Book of Joshua (18:23), we read about Ophrah, a town of the tribe of Benjamin, which has been identified with Taybeh. Ophrah was also Ephraim, the town to which Jesus retired with his disciples after the raising of Lazarus.  The Gospel of John says, “Since that day on, they (the Pharisees) made the decision to kill him. Jesus did not walk in public among the Jews anymore. He went away to a region near the desert, to a city called Ephraim, and it was there that he and his disciples dwelt” (11: 53-54).  So perhaps it was at Taybeh that Jesus resolved to go to Jerusalem to meet his death.  That’s what the Christians of Taybeh believe. 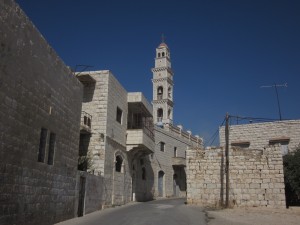 In the Middle East, the pomegranate is a Christian symbol of the passion of Christ. Like the fruit, the crucifixion is hard on the outside, but sweet on the inside.  So how did Taybeh get its present Arabic name?   The biblical Ophrah and Ephraim reminded Saladin of the Arabic word for “demon.”  According to tradition, Saladin changed the name of the town to Taybeh, the “goodly.” It is a goodly hillside town, but sadly one whose population is shrinking, despite the popularity of Taybeh Beer.