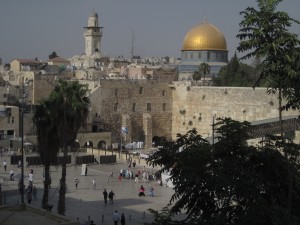 The Western Wall of the Jerusalem Temple is an ancient place of prayer.

Our walk of the Jewish Quarter concluded with a visit to the Western Wall. The wall bounds the Temple Mount (as it is known to Jews) or the Noble Sanctuary (as it is known to Muslims).  Above the Western Wall is the golden Dome of the Rock, a Muslim site connected to the al-Aqsa Mosque.   The Temple Mount is the place where Herod the Great restored the Temple, whose roots lay in the time of Solomon.  The Romans destroyed it in 70 AD. Jewish Law obliges believers to grieve and rend their garments upon seeing the desolate site of the Temple. 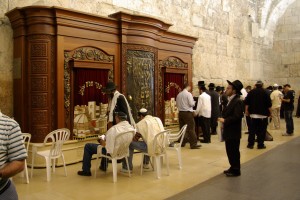 An ark for Torah scrolls dominates the prayer area for men beyond Wilson’s Arch.

When our group arrived, women had to separate from men.  The Western Wall is divided into male and female sections.  I was able to walk through Wilson’s Arch, a prayer area for men on the left side of the Western Wall.  The arch was “discovered” by a British explorer in 1864 and excavated in 1968.  I was wearing dark pants and a white shirt and, with the kippah that was given me as I entered the Western Wall, I blended in.  One of the men praying there asked me a question, but I only smiled and walked on. 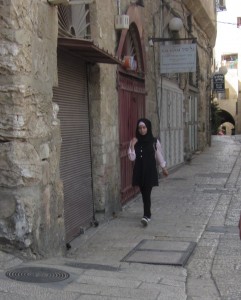 A girl walks through the Jewish Quarter.

The Western Wall disturbed me.  I had come as a tourist, but it would be difficult to remain “just a tourist” after witnessing such a testimony of prayer.  Some of the men under Wilson’s Arch were reading quietly, some were rocking back and forth, and some were singing.  Prayer can mean many things.  As a Christian in secular times, I understand prayer as communion with God — or as an encounter with reality whose origin and destiny lie with God — in the spirit of Jesus Christ.  I do not pray like a Jew or a Muslim.  But I felt that I was being summoned to a wider understanding of the world in one of its most hotly contested areas.  Later, on September 23, we returned to the Western Wall to celebrate Yom Kippur.