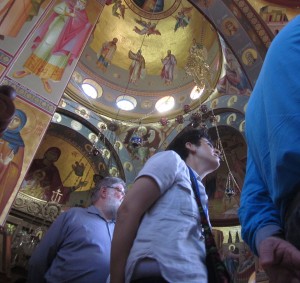 The sacred decoration of the church glows.

The Greek Orthodox Church of the Twelve Apostles, located near the shore of the Sea of Galilee in Capernaum, was our last destination on Thursday, October 15. We had glimpsed it on the previous day, but this time we not only visited it, but got to see the artist at work who had decorated it.  Every other Greek Orthodox church that I had ever seen was decorated on the inside with icons painted on the walls.  They were very beautiful, but they did not glow the way that the icons of this church glowed. Sitting in the back of the church, I discovered why – when I happened to see what lay on the bench beneath the rear wall. 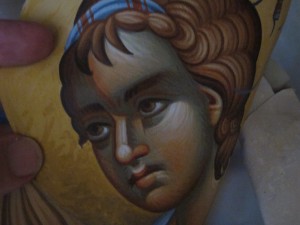 I saw an angel painted on paper.

There was an angel, smaller than my hand, beautifully painted on heavy paper. Other figures clearly had been cut out of the paper leaving only their silhouettes.  I realized that the images on the walls glowed because I was seeing, not painting on the walls, but painting on wallpaper that then was applied to the wall with adhesive.  This hypothesis was confirmed when I looked at the domed ceiling of the entryway.  It was in scaffolding, and the artist was applying his paintings, paintings that he had completed on paper in his studio, to the dome. 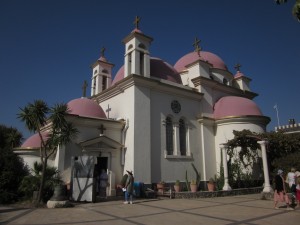 The domes of the Twelve Apostles Church are pink.

Since I live on San Onofre Drive in Camarillo, I was interested to find an icon of Saint Onofrios.  I discovered one in the main body of the church, a saint with a beard so long that he didn’t need any clothing, but wrapped himself in his own hair.  The Church of the Twelve Apostles was not only glorious to see, but it also taught me a lot about how an artist can experiment.  The next day was our last in the Galilee, and we began at Beth Shean national park.