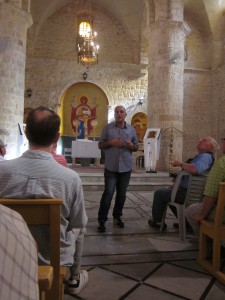 The House of Grace in Haifa serves ex-prisoners returning to society.

From October 12-16 the Tantur participants traveled to the Mediterranean coast, Galilee and the Golan Heights. We began by visiting Caesarea Maritima and Tel Megiddo before stopping at the House of Grace in Haifa. The house was founded after Agnes Bieger, a Swiss national, arrived in Israel to work with mentally disabled children. She married Kamil Shehade, a Palestinian Christian citizen of Israel. There our guide, Ghada Boulos, invited us to sing with her in the chapel.

The next day we visited Nazareth, including the Greek Orthodox, Melkite, and Anglican Churches, plus the Catholic Basilica of the Annunciation.  In the afternoon we saw Zippori National Park, encompassing the ruins of the ancient Roman- and talmudic city. 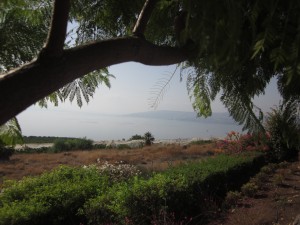 Hills overlook the Sea of Galilee.

The third day we also spent in Lower Galilee, visiting the Churches of the Beatitudes, of the Multiplication of the Loaves, and of the “Table of Peter.” In the afternoon we explored the ruins of Capernaum, the town where Jesus cured a man with a withered hand and where Peter lived.  We also sailed briefly on the Sea of Galilee itself before visiting Migdol.

On the fourth day we toured Upper Galilee, visiting Tel Dan (where Jeroboam erected a golden calf) and Banias (one of the sources of the Jordan not far from Caesaria Philippi).  Later we drove to the Golan Heights, passing Majdal Shams, under Mount Hermon, and lunched at a Druze restaurant in Mas’adeh. Returning we stopped at Avital Volcanic Park and at the Greek Orthodox Church of the Twelve Apostles. 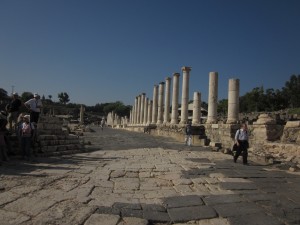 The fifth day brought us to Beth-Shean, where we saw the ruins of the Byzantine City.  On the city walls, located near Mount Gilboa, the Bible tells us that the body of King Saul was displayed (1 Sam. 31).  Later we traveled to Mount Tabor and the Church of the Transfiguration. Tradition designates this spot as the place where Jesus was metamorphosed before the eyes of Peter, James and John. They saw him in conversation with Moses and Elijah, suggesting (before his death) a revelation of his glory.  Click here to follow our trip to the Galilee.