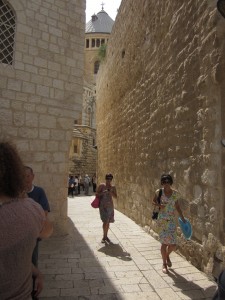 The path to the Coenaculum.

Monday, September 14, was the first day of the Jewish New Year, and Hana Bendcowsky led us through the Jewish Quarter of the Old City of Jerusalem.  Before entering the Quarter, however, we visited the “Coenaculum” or the Room of the Last supper.  The Coenaculum is an ancient building that the Franciscans, as “Custodians of the Holy Land,” bought from the Caliphate in 1335. We read in the Acts of the Apostles that, after the descent of the Holy Spirit, Peter got up and spoke to the men of Jerusalem.  About King David he said, “His sepulchre is with us up until this moment” (2:29).  So the Franciscans concluded that the sepulchre of King David is where the upper room of the Last Supper was.  And today the coenaculum is upstairs and the tomb of David is downstairs. 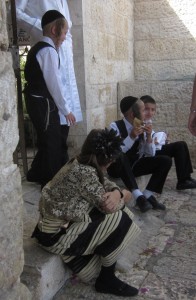 A boy blew a shofar or ram’s horn.

After visiting both the coenaculum and David’s tomb, we walked through the Jewish Quarter.  Today is Rosh HaShanah, the Jewish New Year.  It is a time for celebrations, sweet foods, and new beginnings.  “L’Shana Tovah!” people say.  “Happy New Year!”  We passed a Hasidic man, dressed in a white shirt with black pants, who was walking along with a little boy of five, hand in hand.  We also saw a little girl, even younger, who was wearing a special Rosh HaShanah dress, all in white.  Everyone was getting ready for festivities at home, because for Jews Rosh HaShanah is the most important celebration of the year. 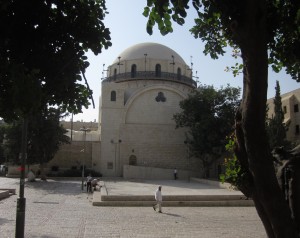 The Hurva is the main Ashkenazic synagogue.

Eventually we entered a newer section of the Jewish Quarter.  It had been the scene of street fighting during the 1948 war.  Homes and institutions had been rebuilt so as to look old.  A good example is the Hurva Synagogue.  It had been founded in the early 18th century, but was destroyed by Muslims in 1721.  For over 140 years it remained a ruin, a hurva, but was rebuilt in 1864.  Destroyed again in 1948, it was rebuilt in 2010.

Follow the links to learn more about the Coenaculum and the Western Wall.