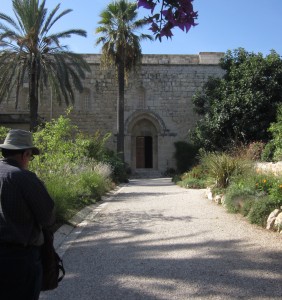 The Crusader Church is the town’s largest building.

On October 11 we traveled to Abu Ghosh, known in the Old Testament as Qiryat Yearim. It was the resting place of the Ark of the Covenant for 20 years between the time that it was captured by the Philistines (1 Sam. 6:21 – 7:2) and the time that King David brought it to Jerusalem (2 Sam. 6). Our guide was Jacqueline Mazoyer, and she guided us to a church that was built in 1140. There is a nearby monastery of monks and nuns of the Olivetan Benedictine Order who worship at the Church.  We arrived in time for the 10:30 Mass.  The entire Mass was sung, either Gregorian Chant or polyphony.  Even the gospel was sung to the accompaniment of a 21-string oud, which sounded like a harp. 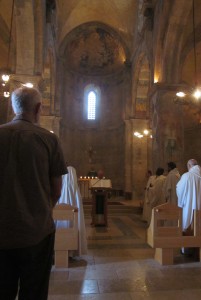 Monks and nuns sang together.

The church is built on a site that was once a caravanserai and where the Romans built a reservoir.  The Byzantines identified the site with the biblical village of Emmaus (Luke 24:13-35), where Jesus revealed himself as his companions broke the bread. During the Mass, the monks and nuns blended their voices so beautifully that I thought that they must rehearse a great deal.  As the music echoed I saw the Byzantine paintings on the walls, paintings of apostles and saints. Most of the faces had been destroyed, and I wondered if that had happened after 1187, when the Muslims defeated the Latins and the church became a mosque. After the Mass, we descended into the crypt of the church, where there is a reservoir (or perhaps a baptismal pool).  Massive and open, it did not look like a crypt at all. 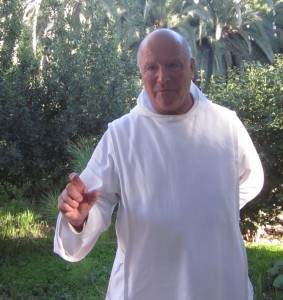 Father Oliver has been at Abu Ghosh 30 years.

When we visited Abu Ghosh a second time on November 12, Fr. Olivier, a French monk in his fifties, spoke to us. He said that the monastery has become a respected part of the Muslim town, and when the son of the mayor was married, all the monks were invited. When the Israeli military wants to expose soldiers to Christianity, it sends them to Abu Ghosh. Olivier shows thousands of soldiers each year what a monastery is. He recently visited an Israeli elementary school to give children a taste of Christian singing. A Jewish cantor was visiting at the same time. Olivier and the cantor sang together a song in Hebrew. Afterwards, the cantor hugged Olivier. 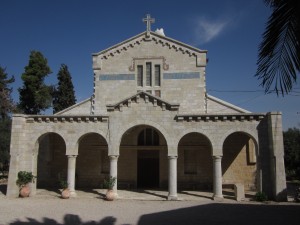 Mary Ark of the Covenant Basilica is above the town.

On October 11 we climbed the hill above the church.  We passed beautiful, spacious Muslim homes, of which I had not seen many before.  We visited the Basilica of Mary, the Ark of the Covenant.  The basilica was built at the city’s highest point upon the ruins of another older church.  It is dedicated to Mary, considered as the Ark of the Covenant (French: Arche d’Alliance) because she carried Jesus within her.  I had not expected to see such Christian sites in a Muslim town.