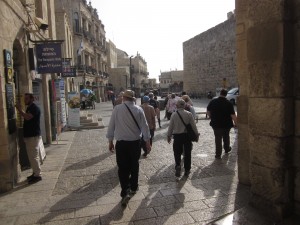 Entering the Jaffa Gate into the Old city of Jerusalem on September 13, we walked for a short way along the street named for Omar Ben el Khatab, a Muslim Caliph (577-644).  But almost immediately we turned left into the street known as “Greek-Catholic Patriarchate,” which happened to be our destination.  The Greek Catholic Church is also known as “Melchite” or “royal,” meaning that it accepted the Council of Chalcedon, sanctioned by the Byzantine Empire, and so holds that Jesus Christ was one person with a divine and a human nature.

The principal celebrant in red brought the bread and wine to the altar.

The Mass was celebrated in Arabic.  A screen separated us from the altar, but through a door we could see it.  We had a booklet that translated the prayers, but I could only understand “Kyrie eleison,” “Alleluia,” and “Amen.” The celebrant, plump and balding, was a forceful speaker.  An altar boy held a microphone to the celebrant’s lips, but it wasn’t necessary.  I couldn’t understand a word he said during the half hour homily, but I was mesmerized by his forceful voice and the way he held a gold cross in his left hand, gesturing repeatedly. 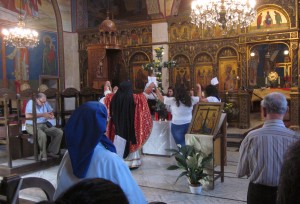 The celebrant reverenced the flowered cross.

Throughout the Mass a number of altar servers, boys and girls, dressed in kerchiefs, assisted the celebrant, who was wearing a black head covering.  At one point he gathered the altar servers around a crucifix that had been wound with flowers.  He and they held hands and bowed to the cross.  Later, there was a procession up and down the aisles of the Church, the girls carrying the cross, the celebrant holding an icon.  As the celebrant passed, the Mass-goers reached out to touch the icon.

After the Mass, a German-born religious of the Little Sisters of Jesus offered me a tiny cup of coffee.  Her congregation was founded by Charles de Foucauld (1858-1916), a French priest killed in Algeria whose mission was to serve Islamic people.  We left the Greek Catholic Church, met our Israeli guide, and proceeded to the Holy Sepulchre, the place of Jesus’ death and burial.