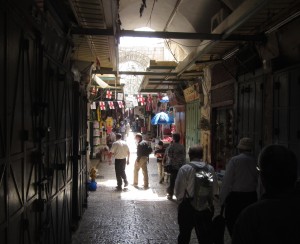 The streets of the Old City are covered markets.

Back at the Jaffa Gate, we met our guide, Hana Bendcowski.  She led us on a walking tour of the Christian Quarter of the Old City. It is full of little alleyways and passages, paved by limestone worn smooth by centuries of foot traffic. Hana said that it was especially dangerous after a rain.  At one point we encountered a group of five boys, in identical blue t-shirts. They were about seven years old, and were picking on a smaller boy in a white t-shirt, swinging his backpack at them. Hana scolded the boys and sent them away. 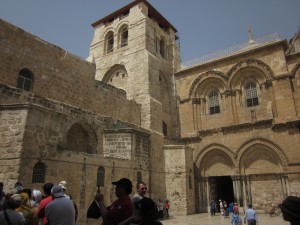 The Church of the Holy Sepulchre has only one door.

She led us to the Church of the Holy Sepulchre, the site where Jesus was executed and buried. The Bible describes Jesus’ tomb as being outside the city wall. Today, however, the site of the Church is within the current walls of the old city. This puzzled people in medieval times. Hana explained that, the city had been much narrower in Jesus’ time, and his execution and burial were then outside the walls.  Herod Agrippa (41-44) extended the city to the north. 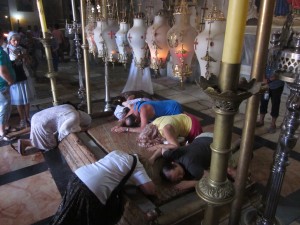 Pilgrims reverence the “stone of anointing” where Jesus’ body was prepared for burial.

We climbed a steep staircase to the site of Golgatha, the site of the crucifixion.  It contains an altar, over the place of the crucifixion.  People climb under the altar to honor the spot.  There are so many candelabra that one can barely see the altar. People were praying and lighting candles.  From the railing above we could look down upon a stone, embedded into the floor below. Lamps are suspended over it.  It is called the “stone of anointing,” and it is reportedly where Joseph of Arimathea prepared Jesus’ body for burial.  Pilgrims were bending over it, kissing it and resting their cheeks upon it. 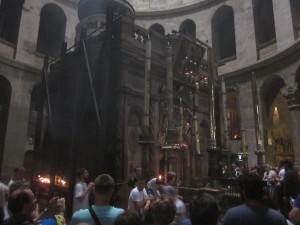 The “aedicule” is a chapel that covers the tomb.

We then entered the rotunda, the enormous room that houses the tomb of Jesus.  Armenian, Franciscan, and Orthodox monks were traveling through the crowds, swinging censors. We had to watch for them.  In the center is the “aedicule” or chapel that contains the tomb itself and the “angel’s stone,” the stone that sealed the entrance to the tomb.  The aedicule is old, blackened by smoke, and supported by steel beams. For it to be renovated, the Catholics, Orthodox, and Armenians would have to agree on a design: no easy thing. 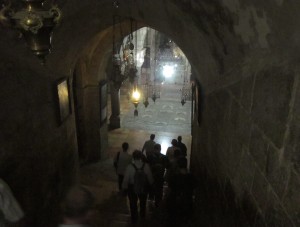 We descended to the cavern underneath the Holy Sepulchre where three crosses were found.

People were brandishing clusters of 33 wax candles, lighting them at the Holy Sepulchre, and passing their hands through them.  The number 33 symbolizes the age of Jesus at his death. Hana explained that the candles are a reminder of the “holy fire” that emanates from Jesus Christ’s tomb on the day preceding the Orthodox Easter.  The faithful light candles from it, and it does not burn them.  We did not wait to enter the aedicule because of the long line. Instead, we descended into the deepest area of the Holy Sepulchre Church.  There the mother of Constantine, St. Helena, reportedly found three crosses, that of Jesus and of the two thieves.

Our first visit to the Christian Quarter was impressive, and Hana promised to take us the next day to the Jewish Quarter.