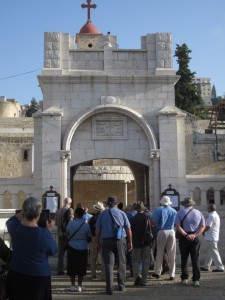 We visited the Orthodox Church of the Annunciation.

On October 13 we stepped out of our hotel, the Villa Nazareth, and found ourselves within walking distance of many of the churches of Nazareth.  Our first stop was the Greek Orthodox Church of the Annunciation.  The original church was constructed during the Byzantine era at the site of a spring. Today the waters flow through an underground channel before emerging in the public fountain known as Mary’s Well about a hundred yards away. There at the church a friend of our guide, Ghada Boulos, greeted her. He is one of the church’s cantors.  Before long, the Mass began, and Ghada’s friend was singing a prefatory dialogue with the Orthodox priest.  The priest was behind the iconostasis, and out of our sight.  We did not stay long enough to see him, but moved on.  We had other places we needed to visit. 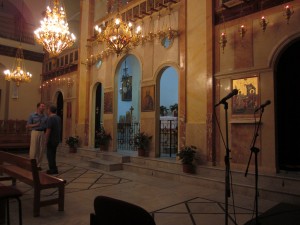 The Melkite Church stands next to a former synagogue.

Ghada was baptized in the Melkite Christian Church that stands next to the “Synagogue Church.” It was built over the ruins of an ancient synagogue.  It may have been the synagogue where Jesus preached on Isaiah 61:1: “The Spirit of the Lord is upon me, because the Lord has anointed me” (Lk. 4:18).  His listeners were so unhappy with Jesus that they were going to throw him over a precipice.  What made them so unhappy?  Perhaps it was the suggestion that the he had brought good news to all people, not just his own — and this was taken as an insult. 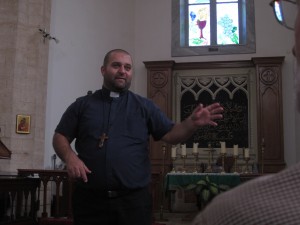 One of our most interesting encounters was with Father Nael Abu Rahmoun of the Anglican Christ Church in Nazareth. He described himself as Palestinian, Arab, Christian, and Israeli. He said that he was Palestinian first, because his ancestors were in Nazareth before the State of Israel.  He is an Arab, because Arabic is his native language.  His family is Christian, and he himself is married. Finally, he is an Israeli citizen, because a passport enables him to travel.  He studied for the ministry in Rome. 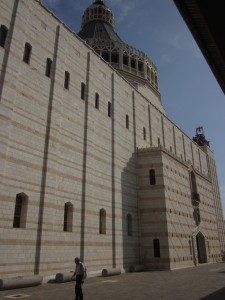 The basiiica is built where Mary heard that she would bear a son.

We walked through back streets to the Basilica of the Annunciation.  The basilica is built over a grotto that tradition identifies as the home of Mary.  On the first floor of the basilica, people can walk down some stairs to visit the grotto itself.  On the second floor, worshipers can see the grotto by looking through an opening, surrounded by a balustrade.  After visiting the basilica, we drove to the Zippori National Park, where a great town thrived at the time of Herod the Great.  Later in the evening, back in Nazareth, a group of us walked back to the basilica.  There was no one inside but a few people. We sat amid the candles and listened to the sound of crickets chirping in unison. It was very quiet until a group arrived to pray at 9:00, and somebody started strumming a guitar.  We went to bed and got ready for our trip to Tabgha.