We entered Yad Vashem at the Visitors’ Center.

On October 1, we toured Yad Vashem, Israel’s official memorial to the victims of the holocaust.  The name means “a place and a name” and is a quotation from Isaiah: “I will give in my house and within my walls a place and a name” (56:5). The reference is to the non-Jews who honor God, and Yad Vashem recognizes the gentiles who saved Jews during the Nazi times.  Tamar Avraham, our guide, is a native of Germany who had studied Catholic theology.  She traveled to Jerusalem in 1987, converted to Judaism, and took a Hebrew name. 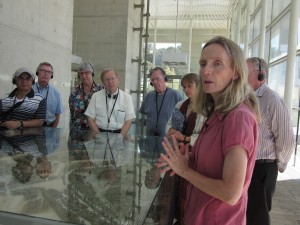 Tamar Avraham led us through the Museum.

Tamar led us through galleries that depicted (1) the extent of anti-Semitism, (2) the outbreak of World War II and the confinement to ghettoes of European Jews, (3) Germany’s “final solution” via forced labor and death camps, (4) the resistance of Jews to the Nazis and the rescue of the Jews at the end of the war, and (5) the aftermath and emigration of the Jews to Palestine. At the end of the presentation we were a somber group.  I wondered what it must be like to conduct such a tour that evokes so many horrors and sorrows.

The Yad Vashem entry quotes Ezekiel 37:14: “I shall place you on your own soil.”

After lunch Tamar led us on a walk to the top of nearby Mount Herzl, named after the founder of modern political Zionism.  She described Yad Vashem as a “secular Temple,” meaning that the hopes of contemporary Israel are built upon the sacrifices of the holocaust.  At the same time, however, she mentioned that 1.5 miles from the museum is the site of the Deir Yassin massacre.  In 1948, 120 Zionist paramilitary fighters attacked the Palestinian village of Deir Yassin and killed 107 out of 600 residents.