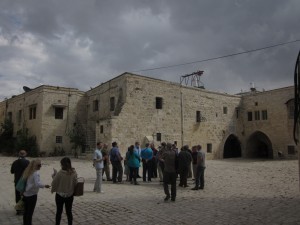 The Armenian Monastery includes a large open space near the Cathedral of St. James.

The Old City of Jerusalem has a population of nearly 40,000 living in an area of less than one square kilometer. The Armenian Quarter occupies one-sixth of the Old City, yet it has a population of only about 500 Armenians. That fact alone suggests the value of the Armenian Quarter and its central features, the Armenian Monastery and the Cathedral of St. James. George Hintlian led us in a tour of the monastery on October 7.  We were disappointed that the cathedral, built during the Crusader era (1142-1165), was in scaffolding. 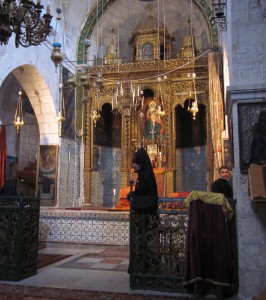 A funeral was in process at Deir el-Zeitouneh.

During our tour, Hintlian explained that a member of the Armenian community had died and was to be buried that day.  He wanted to attend the funeral, so he escorted us to Deir el-Zeitouneh, a little chapel at the Convent of the Olive Tree.  The chapel was empty when we arrived, but soon filled with a number of priests and a crowd of Armenian seminarians, all wearing cassocks and chanting a litany. After a number of preliminary prayers, they brought in the casket with the deceased.  As a group of lay mourners arrived, we departed. We rejoined George at the monastery’s library. He explained that Armenia was the first kingdom to adopt Christianity as its official religion in the fourth century, but the kingdom disappeared by the end of that century. 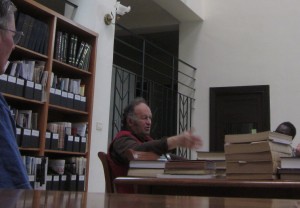 Armenia’s greatest tragedy, however, culminated a hundred years ago, when Turkey massacred two million of its people.  Hintlian has dedicated his life to the dignity of Armenian Christian culture as more of his countrymen leave Israel in search of economic opportunities. It is discouraging, he said, to see the quarter underpopulated.  But he said that the four quarters of the Old City — Jewish, Muslim, Christian and Armenian — have changed over the centuries as national fortunes have waxed and waned.