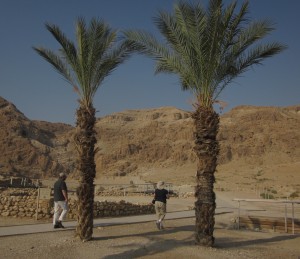 The caves were found above the site.

The Qumran archaeological site is located in the West Bank, i.e., west of the Jordan River and the Dead Sea, and managed by Israel’s Qumran National Park.  We visited it on November 18 under the guidance of Jared Goldfarb.  Between 1946 and 1947, three bedouins found 981 different scroll texts, of which 225 are biblical texts.  They include parts of all but one of the books of the Hebrew Bible (Esther is missing), and thus represent the oldest extant manuscripts.  The scrolls also include four of the deutero-canonical books of the Bible (found in Catholic Bibles, but not in Hebrew). 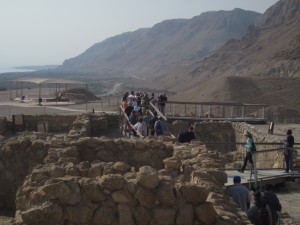 Archaeological ruins lie near the caves.

The Qumran Park also includes the excavated remains of a settlement of the Hellenistic period (2nd century BC) that was occupied until its destruction  under the Romans (68 AD).  Roland de Vaux, a priest-archaeologist who worked on the settlement in the 1950s, interpreted the site in relation to the scrolls.  He thought that it belonged to a religious community of Jews known as the Essenes. Since De Vaux, the settlement has been variously interpreted as a villa, a fortress, and a commercial center. 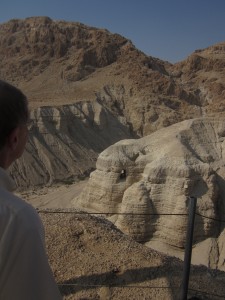 Most of the scrolls were found at Cave 4.

In 1996 a potsherd was found with a Hebrew text including the word “Yahad” or community.  Scholars have linked it to the group responsible for the scrolls.  The text suggested that a certain man had bequeathed his belongings to the Qumran community, thus linking the scrolls to the ruins. This is speculative but fascinating.  It was also fascinating to discover that the Qumran text of Psalm 145 includes a line missing from the Hebrew Bible, and that the Qumran text of 1 Sam. 17 lists the height of Goliath as “four cubits and a span,” whereas the Hebrew Bible (the 9th century Aleppo Codex) lists it as “six cubits and a span.”  All of this, as well as the speculation that Vendyl Jones may have been the model for Indiana Jones, left us dizzy. Scholarly questions do not necessarily lead to faith. We left Qumran and travelled to Masada.