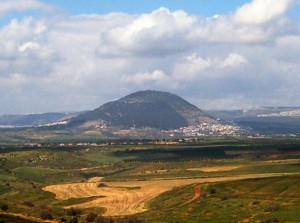 Our last stop on October 16 was Mount Tabor.  It is the traditional site of the Transfiguration of Christ.  According to the Synoptic Gospels, Jesus ascended an unnamed mountain with his disciples.  There he became radiant and was seen speaking with Moses and Elijah (Mk. 9:2-8).  To reach the top, our bus drove through the city of Daburiyya, then we transferred to smaller buses, since the drive to the top had multiple steep switchbacks.  Often two buses would meet at a sharp turn, and the lower bus would back down and allow the upper to pass. 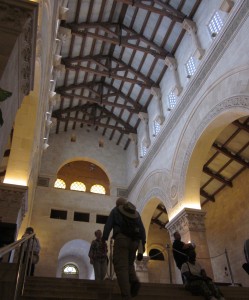 We climbed from the grotto upwards.

The Church was built in 1924 by Antonio Barluzzi.  It has three small “chapels,” meant to remind us of the “booths” that the disciples wanted to build for Jesus, Moses, and Elijah. Below the easternmost chapel is a grotto, to which we descended by broad steps.  When we arrived, the bells for the angelus were ringing. But when they were done, our guide, Ghada Boulos, sang to us a hymn in Arabic. She directed our attention to the small chapels of Moses and Elijah.  In Elijah’s chapel, the prophet is raising his eyes to God in thanksgiving.  His offering of a sacrificial animal is being consumed by fire, while the offerings of the prophets of the Ba’als are stone cold.  Ghada thought he might have been whistling. 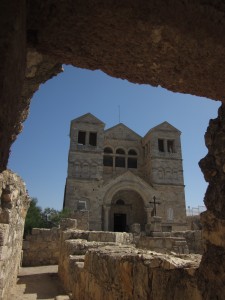 The figure of Moses symbolizes the law that God gave the Israelites.  The figure of Elijah symbolizes the word of prophecy.  Jesus was “transfigured” — the word in Greek is “metamorphosed” — because the disciples saw him as he really was, the heir of the law and of the prophets.  He would instil each with spirit, showing that law must be applied justly, and that God speaks through spirit-filled words.  Coming down Mount Tabor, we watched para-gliders, riding the wind currents that swept up the mountain.  The invisible airs that kept them aloft were icons of spirit.  We descended into the Jordan Valley, and followed the Jordan south to Jericho, where we climbed up to Jerusalem and back to Tantur.