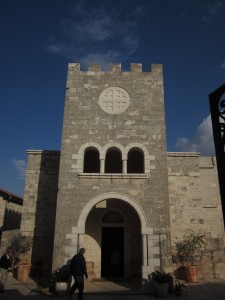 The Mount of Olives contains many sites connected with the Passion of Jesus Christ, and Father Russ McDougall toured them with us on November 10. In the springtime, at the start of Holy Week, pilgrims make a procession down the mountain.  They begin at the Church of Bethphage, led by the Catholic Melkite Patriarchate, the Latin Patriarch, and the Greek Archbishop. Pilgrim groups start out ahead and line the route, greeting the procession with songs and blessings. St. Mark mentions Bethphage in connection with Bethany, i.e., as two town on the way to Jerusalem from Jericho. According to the gospel, Jesus asked his disciples to find a donkey colt.  He rode upon it to Jerusalem, heralded by crowds waving palm branches, a moment of victory before his arrest and crucifixion. 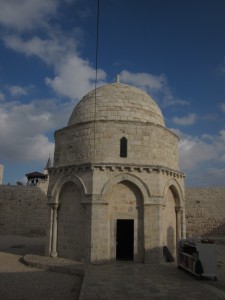 Candles burn in the Ascension Church.

Up a steep and extremely narrow street — very hard for our bus driver to navigate — is the Chapel of the Ascension.  It marks the place from which Jesus ascended to heaven after his crucifixion.  Christians have celebrated the ascension here since St. Helena ordered the construction of a nearby sanctuary. The Spanish pilgrim Egeria visited the spot in 384.  In 680 the Frankish pilgrim Arculf spoke of “a round building open to the sky, with three porticoes entered from the south.” Lamps shone through windows facing Jerusalem. This church was rebuilt by the Crusaders of the 12th century, only to be destroyed by the armies of Saladin.  They left an outer wall surrounding the octagonal shrine that stands today.  During the Middle Ages, it was used as a mosque, and a minaret still stands outside. 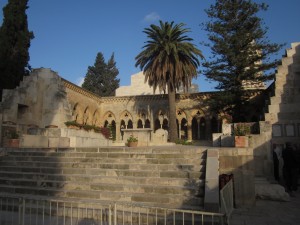 Nearby is the Church of the Pater Noster, also known as the Sanctuary of the Eleona (or olive grove). It stands on a site where one tradition says that Jesus taught the Lord’s Prayer (Lk. 11:2-4). In the gardens I wandered among the olive trees in the late fall sunshine. St. Helena built a church here, but it was destroyed by the Persians in 614, only to fall into ruin in Crusader times. Princess Aurelia Bossi, a French noblewoman, built a Carmelite cloister on the site in 1868. Today, the land on which the church stands formally belongs to France. 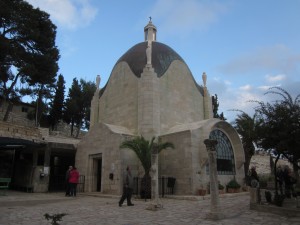 Jesus wept over Jerusalem at this site.

From the Pater Noster we walked past several tombs to the Church of Dominus flevit, Latin for “The Lord Wept.”  It commemorates the tears that Jesus shed as he looked on Jerusalem and predicted the destruction of the Temple and the dispersion of the Jewish people (Lk. 19:37-42).  The site is still relatively high up on the Mount of Olives, directly across from the Temple Mount.  It began to be a pilgrimage site during the Crusades.  The Church was constructed from 1953-55 according to the design of Antonio Barluzzi. 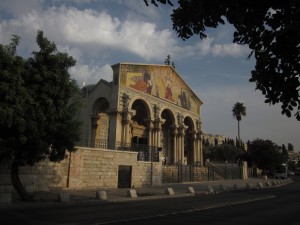 Many countries funded the Church of All Nations.

Our final stop was the Church of All Nations, located at the bottom of Olivet. It is also known as the Basilica of the Agony, built next to a garden associated with the biblical Gethsemane.  There Jesus agonized over his approaching death(Mk. 14:32-42).  The trunks of the olive trees date back centuries and are truly immense. Antonio Barluzzi designed the church, building it over a 4th century basilica and a 12-century Crusader basilica.  We prayed at the nearby Grotto of Gethsemane and returned to Tantur.