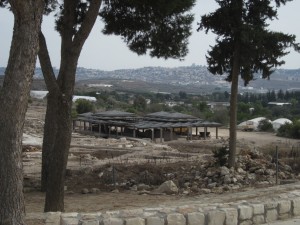 At Zippori, a shelter protects the mosaics.

We visited Zippori National Park or ancient Sepphoris on the afternoon of October 13.  In Christian tradition, the city — about six km. from Nazareth — is the birthplace of the Virgin Mary.  Our guide suggested that Jesus and Joseph may have worked at Sepphoris, because it was a metropolitan area where craftsmen would have been in demand.  We walked along the broad main street (the “cardo” or heart of the ancient city), and the limestone pavement was worn smooth, with grooves made by chariots or carts. 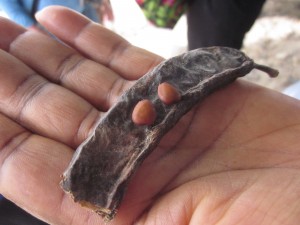 The carob tree yields pods that were food for swine.

Our guide pulled a pod from a carob tree located near the site.  She identified it the with the fodder for swine that the prodigal son wanted to eat for himself (Lk. 15:16). Today the Sepphori site has been excavated to show remarkable mosaics dating from the 3rd-6th century AD.  One large mosaic containing images of animals and human beings of Egypt, is called the “Nile House” because it was devoted to measuring the floods of the Nile. 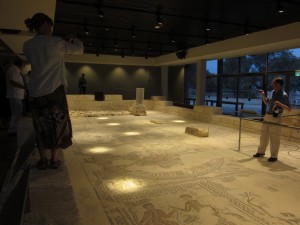 Zepphoris also contains the ruins of a sixth-century synagogue that is remarkable for its mosaic floor.  The floor integrates Hebrew and Greek words, as well as a zodiacal chart.  Finally, we saw Zepphoris’ Roman villa, built around the year 200.  There is a dining room with mosaic images of figures from antiquity, the most famous of which is a woman’s face, the so-called “Mona Lisa of Zepphoris.”  We had enjoyed our first encounter with the Nazareth, and were looking forward to the next day’s trip to the Sea of Galilee.