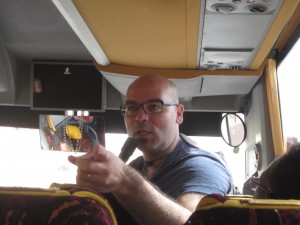 Husam Jubran guided us in Jericho.

On September 30 we drove to Jericho, which is administered by the Palestinian Authority. Husam Jubran, our guide, recounted how he was imprisoned in 1988 during the First Intifada, a Palestinian uprising against the Israeli occupation of the West Bank and Gaza that lasted from 1987 until 1991.  At that time, said Jubran, he was a rock-throwing teenager.  He was arrested and given a six-month sentence.  He then decided to do something with his life, entered the university and earned a degree in sociology, specializing in tourism. 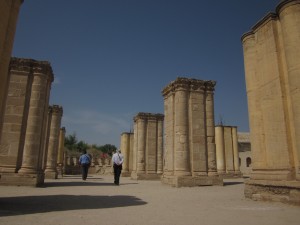 The palace of Khirbat al-Mafjar was built in 743 AD.

Driving through Jericho, we arrived at the ruins of Khirbat al-Mafjar, believed to be the palace of an eighth-century Caliph.  It is one of the best-preserved ruins of art and architecture from the Umayyad Dynasty of early Islam.  The palace includes an ornate bath complex and an agricultural estate.  A large rose window from the main palace, featuring a six-pointed star, has been reconstructed.  Inside the bath is the famous mosaic known as the Tree of Life, beneath which two deer graze and a third is attacked by a lion. 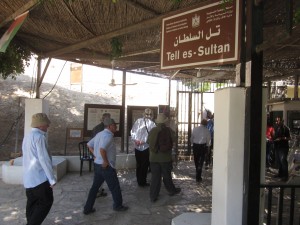 Sultan’s Hill is an archaeological site.

After viewing the Umayyad-era ruins, we drove to the Tel es-Sultan or Sultan’s Hill, the ruins of ancient Jericho. The site includes pottery shards that date back to the 8th millennium BC.  There are ruins of a wall and tower that may have been the fortress that Joshua captured when the Hebrews entered the Promised Land.  After lunch, we drove out into a desert waste.  We visited the Mosque of the Prophet Moses, the site where some Muslims claim that the Moses was buried — a site now haunted by scrawny cats.