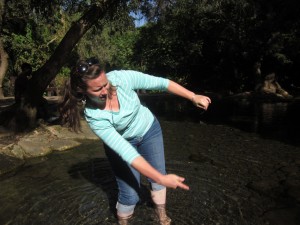 We traveled on October 15 to the Tel Dan National Park, through which water from Mount Hermon runs on its way to the Jordan River.  The Bible describes Dan as the northernmost city of the Kingdom of Israel, known during the Conquest as Laysha (Jg. 18:7) or Leshem (Jos. 19:47). Excavators have uncovered the city gate of mud bricks and basalt standing stones. Today it is popularly known as Abraham’s gate, due to the story of how Abraham traveled to Dan to rescue his nephew, Lot (Gn. 14:14). 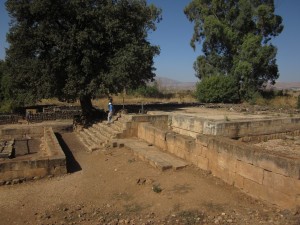 The Hebrews worshiped here in 10th century BC.

Jeroboam, one of the sons of Solomon, founded the northern Kingdom of Israel around 933 BC.  He erected two golden calves in Bethel and Dan (2 Kg. 10:29).  Some scholars speculate that this was the origin of the story of the Golden Calf during the Exodus in the desert.  Other scholars believe that Jeroboam was creating a sacrificial area, a sacred space for God that would rival Solomon’s Temple in Jerusalem.  We tried to imagine the ancient mentality that would view the killing and eating of an animal as a kind of communion with God. 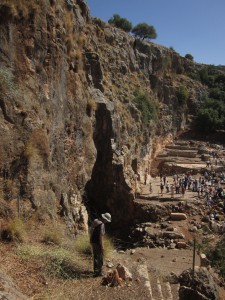 After viewing Tel Dan, we drove to Banias, near the biblical Caesaria Philippi.  Banias is the site of another spring that feeds the Jordan River.  Shortly before the time of Jesus, Herod the Great erected a white marble temple, at the grotto above the spring. Banias became known as Caesaria Philippi, the administrative center of Philip the Tetrarch.  It is the place where Jesus posed the question, “Who do people say that I am?” (Mk 8:27).  This is the center of Mark’s gospel.  Peter answered correctly, but failed to understand what he said.  He could not see that the Messiah would have to suffer and die, and so Mark depicts Jesus as turning on him and calling him a “satan” or obstacle.  This gave us plenty of food for thought as we drove to our luncheon in the Golan Heights.