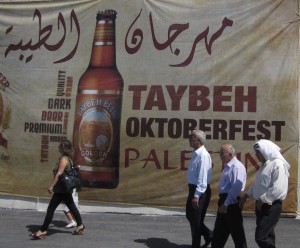 The Oktoberfest was at the Taybeh Brewery.

On September 19, eight of us Tantur participants traveled to the West Bank town of Taybeh for its annual “Oktoberfest.”  Taybeh is the home of the Taybeh Brewing Company, and for the past twenty years — except during 2014, during which time the Fest was cancelled in solidarity with the people of Gaza — Taybeh has promoted its local brew.  When we arrived at 1:00 PM, a gala reception was winding down at the Taybeh Golden Hotel, where we were able to mingle with local dignitaries and hear the music of the fretless oud.  After that we walked to the brewery.

Organizer Maria Khoury welcomed participants from the sound stage, saying that the Taybeh Brewing Company simply wanted to show that Palestine can offer products “as good as could be found anywhere in the world.”  She then introduced various entertainments from the stage, including a rock group and a Palestinian woman who had won a bodybuilding contest in Tel Aviv and was on her way to the next level of competition in Brazil. 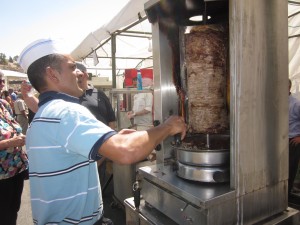 After we had drunk a beer and eaten shawarma from a local vendor, we wandered around the city.  Taybeh is known in the Bible as “Ophrah” and “Ephraim,” and is the last all-Christian community in the West Bank.  It has a Greek Orthodox, a Latin Catholic, and a Greek Catholic (Melkite) Church, each of which we visited.  Before I take you on tour of the Taybeh Brewery, where I enjoyed “The taste of Palestine,” follow me to learn about the town’s Palestinian Christians.