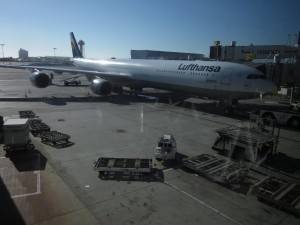 The Boeing 747 carried hundreds of us passengers overnight to Frankfurt.

On Sunday, September 6, I set off for The Tantur Ecumenical Institute.  I boarded a 6:55 PM flight from Los Angeles to Frankfurt, Germany. Upon arrival, I walked to Concourse C and went through security, my first of the day. It was two hours before my flight. After about a half hour, I was asked to leave gate 13. The gate, I was told, had to be secured for the Tel Aviv flight. I left security, then entered concourse C again and bought a sandwich. Then I left security a third time so that I could enter the gate for the Tel Aviv flight. There was a special screening, the third since my arrival. After walking through the detection device, I was patted down. Many passengers were men in black suits with beards and yarmulkes. 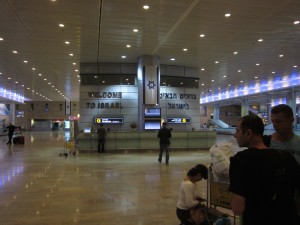 Once I got out of passport control, I collected my suitcase near the “Welcome to Israel” sign.

The flight departed 45 minutes late, but landed on time at Ben Gurion Airport. At the passport control, the official was surprised when I said that I was staying until mid-December. I explained that I was participating in an educational program. The official gave me a nine-month visa. My luggage was waiting and there was no one at customs, so I just walked out of the terminal. It was about 11:45 PM, warm, breezy, and humid. I wanted to take the Nesher Shuttle from Tel Aviv to Tantur in Jerusalem. 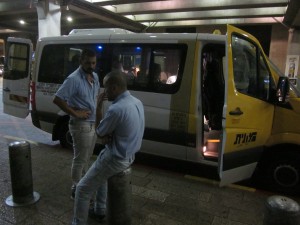 The Nesher Shuttle drivers discussed which one would take me to the Tantur Ecumenical Institute.

The shuttle is a ten-passenger van that departs when the van is full. The first Nesher driver didn’t want to put me on his bus. It was going to North Jerusalem, and I was going to the South. So I boarded a second shuttle, which departed about 12:15 AM. The driver was fast.  At that hour there was no traffic, and he raced through the narrow Jerusalem streets.  He dropped off nine people before he left me, at 1:40 AM, at the Tantur Institute. I slept until 8:00 AM. The second day of the program included a trip to Bethlehem.  Click here to join me.