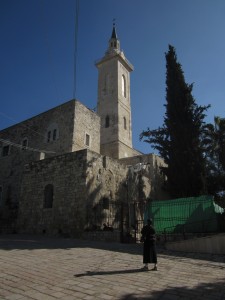 John the Baptist’s birthplace was here.

The birthplace of John the Baptist, and the place where his mother Elizabeth was visited by the Virgin Mary, is Ein Karem, a neighborhood southwest of Jerusalem.  It is one of the few “depopulated” Arab localities — towns where the people fled in 1948 — which survived the war with most of the buildings intact. 300 guerrilla fighters from the town, reinforced by Syrians, fought against the Israelis but were defeated. Most of the Arab residents never returned.  Tantur program participants visited the town’s Christian sites on November 12 with Tina Blomquist. The remains of an ancient mosaic floor and a cave beside the altar of the 19th-century church mark the birthplace of the Baptist.  There is also a local spring connected with the Virgin Mary that is named “Mary’s Spring.”  We were told, however, that the water was not safe to drink. 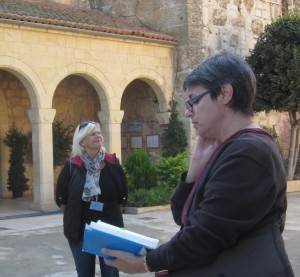 From the Church of John the Baptist we walked to the Church of the Visitation, the church that commemorates the visit of the Virgin Mary to her cousin, Elizabeth.  Once we arrived at the church, we gathered in the courtyard to hear St. Luke’s account of the Visitation, and Mary Guido sang the Magnificat, the Virgin’s proclamation of joy that she would be the mother of Jesus.  The Church of the Presentation. with its paintings of Mary as Theotokos and as the Immaculate Conception, was the design of Antonio Barluzzi, the famous architect who created so many churches in the Holy Land during the twentieth century. 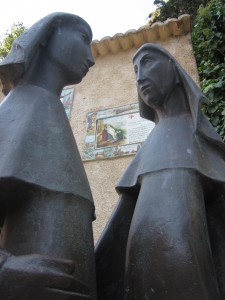 When Mary greeted Elizabeth, her baby leaped within her womb.

Our guide, Tina Blomquist, was a little anxious during the morning, and we learned why at mid-day. She waved her cell phone in the air and announced that her step-daughter had just given birth.  We arrived at the town of Abu Ghosh (which we had visited on October 11) and ate our lunch in a celebratory mood. After that, we visited the old crusader-era church of Abu Ghosh, which many claim to be the locale of Emmaus.  It is the place, a day’s walk from Jerusalem, where the resurrected Jesus was revealed in the breaking of the bread. We shared in the mid-day prayer of the monk, and Father Olivier share his thirty years of experience in the Holy Land.  After that, the bus drove us to the Old City of Jerusalem, where we watched “Jerusalem: A Celebration,” part of Jerusalem Expo 2015 at the Notre Dame Center.