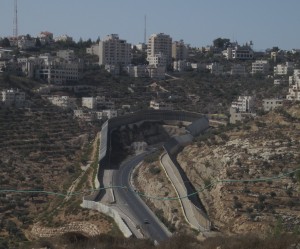 Highway 60 tunnels under the West Bank.

We visited Israeli settlements around Jerusalem on October 3 as part of a presentation by Eldad Brin on the Geopolitics of Jerusalem.  Brin led us to a hilltop in Gilo, an area in Jerusalem widely considered an illegal settlement because it was built on land that was annexed by Israel following the Six-Day War in 1967. From Gilo we looked down on Hwy. 60, which connects Jerusalem to other settlements.  It does so via a tunnel which avoids the annexed upper ground in the West Bank.  The approach to the tunnel is lined by awnings which protect autos from projectiles. 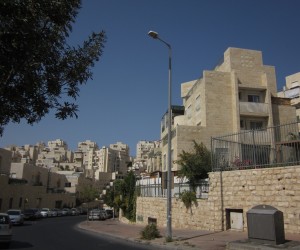 We also visited Har Homa, a settlement of 25,000 whose construction of Jerusalem stone started in 1997. The land of Har Homa (like other settlements) was annexed after the 1967 war. Jewish and Arab landowners protested that their land was wrongly expropriated, but the Israeli Supreme Court ruled in favor of the government. In March 2015, Benjamin Netanyahu said that “we had to protect the southern gateway to Jerusalem by building here.”  In order to promote the growth of settlements, the Israeli government subsidizes the cost of home ownership. 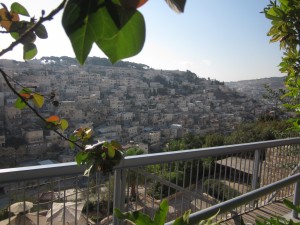 Palestinians make up 40% of Jerusalem, but receive 10% of its services.

Finally we parked where we could view an East Jerusalem neighborhood where Palestinians live.  The homes were scattered over the hillside without sidewalks or parks, and the streets are full of trash.  Brin said that Palestinians in Jerusalem do not receive their fair share of city services because they refuse to participate in municipal elections. To do so would be to concede the right of Israel to govern them.  Brin was unapologetic about the policies of Israel.  It separated Palestinian Arabs from Jews for security purposes.  But it has led to a situation that will be difficult for Israel to sustain.