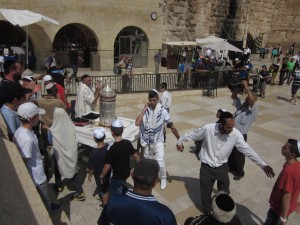 Underneath the Muslim Quarter is a long excavation exposing the Western Wall of the Temple Mount.  In the time of Herod the Great, the place below the wall was the Tyropoeon Valley, and a great bridge rose to transport celebrants from the valley to the mount. In the 1860s, Charles Wilson and Charles Warren began to excavate the area, and after 1967 the Israelis pushed the excavation further beneath the city streets, uncovering the entire length of the Western Wall. 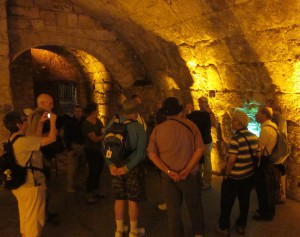 We saw the underside of the Temple Mount bridge.

In the 15th century, Mujir al-Din, a Muslim historian, described the streets below the Temple Mount. Our guide Jared Goldfarb led us beneath those streets to see the buried parts of the Western Wall and the remains of the bridge over which worshipers climbed to the mount. Herod was so demanding as a builder that, after the temple blocks were in place, masons had to carve a margin, distinguishing one stone from another. In the underground passage, we came to a quarry with stones half cut and a cistern that still held water. 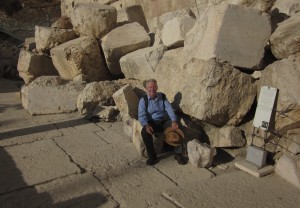 In 70 AD, the Temple was pulled down by the Romans.

After our underground sojourn, we went outside to the southwest corner of the Mount or Noble Sanctuary.  On the southern wall the Double and Triple Gates led into the mount itself.  There are remains from the Roman, Byzantine, and Umayyad periods.  It was a warm day and I had seen a lot of the remains of the ancient temple.  It was destroyed in 70 AD, and I reflected on this while sitting on a pile of ancient rubble.