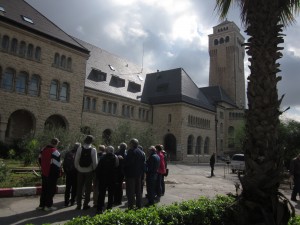 The hospital specializes in oncology and nephrology.

On November 10 we visited the Mount of Olives in Jerusalem, starting with the World Lutheran Federation’s Augusta Victoria Hospital.  The hospital is one of six that serves Muslim and Christian Palestinians in East Jerusalem, the sector of the city that was taken over by Israel in 1967.  Its primary mission since 1948 has been to care for Palestinian refugees. Many of them view the State of Israel as an occupying power, and are reluctant to use Israeli hospitals, even in those cases in which they may be entitled to use them. 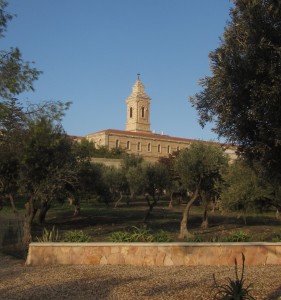 The Pater Noster Church has an olive garden.

After our tour of Augusta Victoria, we traveled down the Mount of Olives,  which lies to the east of the Old City of Jerusalem. Also known as Mount Olivet, it is the location of the Silwan necropolis, a cemetery with over 150,000 graves. On our way we visited a number of sites connected with the passion and death of Jesus.  In addition, the Acts of the Apostles describes the Mount of Olives as the place from which Jesus ascended into heaven. The Orthodox tradition regards it as the location of the tomb of Mary.  In that tradition, she was not assumed into heaven, but died a natural death and her body rose after three days. 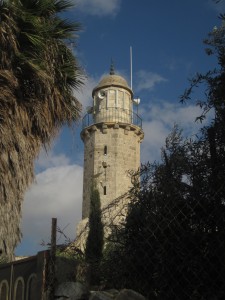 A minaret tops the site of the ascension, at one time a mosque.

Descending from Olivet we walked a procession route for Palm Sunday, when Christians celebrate Jesus’ welcome into Jerusalem.  We stopped at the Church of Bethphage, where Jesus sent his disciples to find a colt for him to ride.  We then visited the “Ascension Aedicule,” a small church that marks the ascension. The church was once a mosque, and today is crowned by a minaret. A few hundred yards away is the Pater Noster Church, built in 1868 on the ruins of a 4th-century church that commemorated the ascension.  After that we visited the Church of Dominus flevit, which recalls the tears that Jesus shed over Jerusalem, and the Church of All Nations, which commemorates Jesus’ agony in the garden. Click here to learn more about the Augusta Victoria Hospital, and here to read about the churches on Olivet.