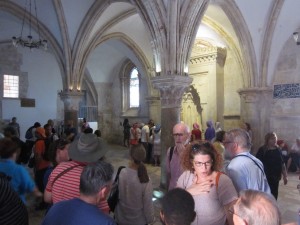 The Coenaculum is the site of the “upper room.”

Before entering the Jewish Quarter on September 14, we visited the Coenaculum, the reputed site of the Last Supper.  “Coenaculum” is the term for an eating-room in a Roman House where people took the evening meal (the “coena”). After this building was purchased by the Franciscans in 1335, they argued with the Jews over the location of the tomb of King David.  The argument was solved when the Muslims took over the building and turned it into a mosque in 1551.  Today Christians and Jews share the building, but coexistence is not always peaceful. 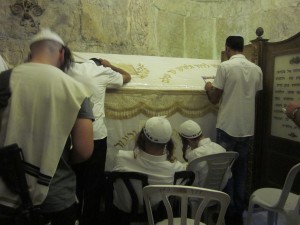 After our visit we walked downstairs to the tomb of King David.  It is supervised by the Diaspora Yeshiva, a Jewish school founded in 1967 for foreign students.  It describes itself as the “only Jewish institution on Mount Zion.” In 2013, Yeshiva students were accused of violence against non-Jews. Many scholars believe that the connection between the tomb of David (located at today’s Mount Zion) and the historical city of David (a dig half a mile to the east), is tenuous.  The crusaders may have originated the story about the king’s tomb. 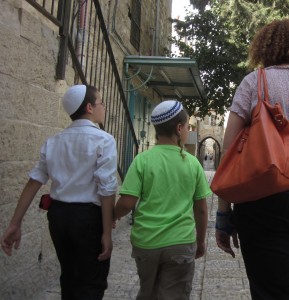 As I walked away from the site, two boys wearing kippahs passed us.  Perhaps they were hurrying to their homes for the evening meal. I reflected on the importance of the evening meal as a time of peace.  The last supper was an evening meal of peace for Jesus on the night before he died.  His memory is bound up with the belief that it is better to suffer evil than to participate in it.  He was committed to doing good, no matter the cost. The question remains: what is the good to which we should commit ourselves? For us Christians, the answer has to do with the evening meal and the celebration of God’s spirit and peace.  Our walk continued to the Western Wall.