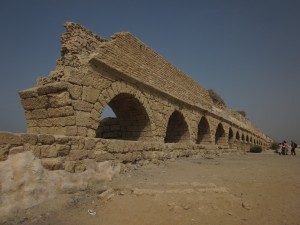 Caesarea Maritima was built by Herod the Great.  Today it is a national park lying halfway between Tel Aviv and Haifa.  We Tantur participants visited it on October 12.  It was named after Augustus Caesar and described by Josephus.  At the park is a copy of the so-called “Pilate Stone,” the only archaeological find that mentions the Roman prefect Pontius Pilate, by whose order Jesus was crucified.  Such finds provide material evidence by which historians  can anchor the accounts of Jesus in the Gospels. 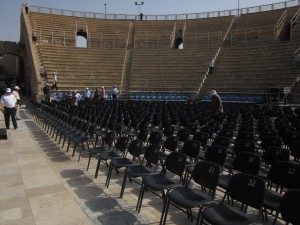 The ancient amphitheater has been restored.  When we arrived, the stage was equipped for a large pop concert, complete with towering loudspeakers, a grand piano, and a lighting array.  But we could still imagine what it must have been like twenty centuries earlier.  Ghada Boulos, our guide, revealed that she loves to sing, but confessed that she is not a fan of pop music.  Still she acknowledged that only the most famous popular singers are invited to perform at Caesarea Maritima’s restored theater. 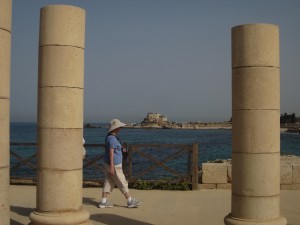 St. Paul was sent from Caesarea to Rome.

Caesarea figures prominently in the Acts of the Apostles.  The city was evangelized by Philip (8:40), a deacon who later gave hospitality to St Paul (21:8-10).  From Caesarea Paul set off on his first missionary journey (9:30).  Later he was imprisoned two years at Caesarea while he awaited transport to Rome for his trial. At Caesarea St. Peter baptized the Centurion, Cornelius — the beginning of Apostolic Christianity’s mission to non-Jews (10:1 ff). After our visit, we drove to Tel Megiddo.