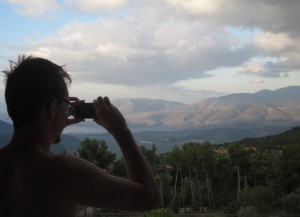 Our window looked over the Corinth Gulf.

We had arrived at the Amalia Hotel Delphi on the evening of October 27, and were astonished to see out our window on October 28 a view that stretched to the Gulf of Corinth.  After breakfast, we drove to the site of the “tholis” or circular structure of the Athena of foresight. On Tuesday evening, Paul and I had walked through the town and met a Delphi shopkeeper.  He said that the youth hostel where I had stayed in 1973 has been replaced by the “Hotel Tholis,” named after Athena’s temple. 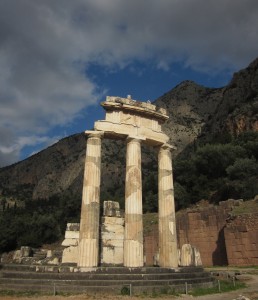 No one really knows whether the Athena Pronaia really means “Athena of Foresight” or “Athena standing before the sanctuary of Apollo.”  Vitruvius said that it was raised in 380 BC on plans by the architect Theodoros of Phocea or Phocis (the valley below).  Paul and I walked from the Tholis to the Castalian spring which comes from a ravine about the Athena Pronaia. The spring was used for bathing by contestants in the games that took place to honor Apollo, and suppliants who came to ask questions of the Delphic oracle washed their hair in it.  The spring predates classical Delphi. A serpent named Python guarded the spring, but was killed by Apollo — a sign of the ascendancy of reason over the forces of nature. 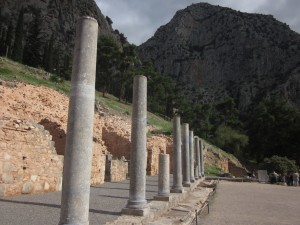 Pilgrims of Apollo could shop in the market.

We then entered the precincts of the Temple of Apollo.  The major cities of Greece would vie to build the most impressive treasury and ceremonial buildings (like that of Athens) that would line the ceremonial passageway up to the Temple of Apollo.  There, at the temple itself, cities or individuals would submit a question to the Delphic Oracle, usually a mature woman.  She would drink of the Castalian spring, then (with the help of Apollo’s priests) answer questions. Socrates’ friends asked, “Who is the wisest man?” 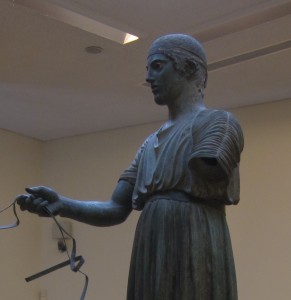 After the tour, we visited the museum connected to the archaeological site.  There our guide, Stathis Tsantekídes, showed us the difference between the depiction of the human face prior to the classical period and when the period began.  Prior to the period, sculptures of the human face were static and unemotional.  But as the period began, he said, Greek sculptors began to portray the human face as more lifelike, and to include details that would add to its psychological realism.  His example was the famous charioteer in the museum, whose face is calm (suggesting that the gods bring about victory, not men) but content (suggesting the charioteer’s joy at winning). 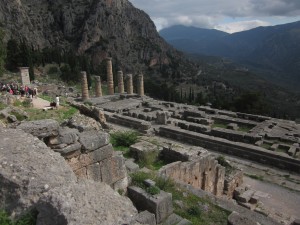 The temple of Apollo is the largest building.

The Greeks believed that Apollo spoke through the oracle or “Pythian.” She sat on a tripod seat over an opening in the earth called the “chasm” and raved while in a trance. Her ravings were “translated” into speech by the priests of the temple.  A council of state representatives (the Amphyctyonic Council) supervised the Pythian Games, which were held every four years.  These were the setting for a national event that, in its day, unified many tribes.  Delphi was glorious, but we boarded the buses for Kalambaka and the monasteries of Meteora.