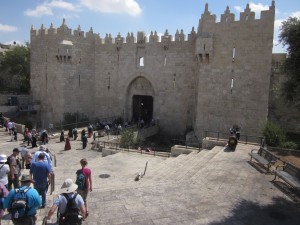 The Damascus Gate leads to the Muslim Quarter.

On September 21, we had our first walk through the Muslim Quarter of the Old City of Jerusalem.  We entered through the Damascus Gate — which is on the north side, about 135 miles from Damascus.  The guide book says that the Damascus Gate is “the finest example of Ottoman architecture in the region.”  As you enter, you must immediately turn left, which takes you past a number of open-air stalls selling women’s scarves. I’m sure that the shop owners have had these concessions for many years. 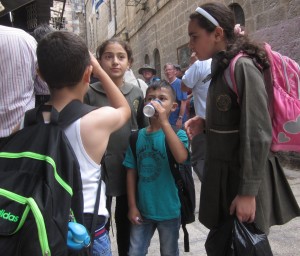 A group of Muslim children stop for a drink. 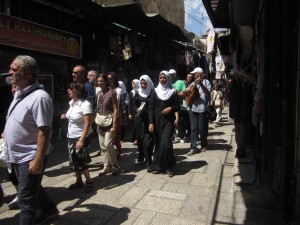 After we had seen the excavated wall, we traveled back through the quarter for lunch: hummus, pita bread, falafel, and salad, plus our choice of freshly-squeezed juice: lemon, orange, or pomegranate.  As we walked along, we noticed signs in Latin, indicating the Stations of the Cross. The Via Dolorosa is not in the Christian Quarter, but in the Muslim Quarter.  Click here to learn about the excavations under the Western Wall and the Noble Sanctuary.